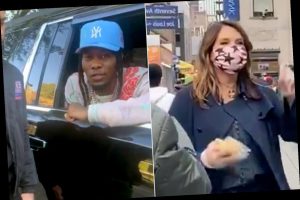 Mariska Hargitay and Offset are the latest celebrities to bring snacks to the polls.

In footage posted by Avalos, the Law and Order star tossed Milk Bar cookies to people standing in line outside of Madison Square Garden.

"Who said voting's not fun?" the actress said as she passed around the treats. "Thank you for voting."

"Voters have about a 2hr wait. PS I got a blueberry & cream cookie. Thanks, @Mariska !" Avalos wrote on Twitter alongside the video.

"Truly and deeply, I believe in our collective power to win this fight for the soul of our nation," a portion of Hargitay's caption read. "If you are still in line waiting to vote, please stay in line. If you are still thinking about going and haven’t: go—you still have time to participate in this important process. And please, take care of yourselves."

Meanwhile, Offset was in Atlanta Tuesday handing out veggie burgers.

After voting himself, Offset shared a video on his Instagram Story.

"Especially as young folks, you know what I'm saying. The numbers right now, we're kind of low on voting. So, I would like for us to get it up. We matter, we mean something to the world. We mean something to our community," he continued. "We can't keep keeping our voice quiet. Our voices matter, so let's get together. Let's do it. Let's turn up. We can have fun, but it's time to handle business and we're running out of time. So, let's get to them polls and vote, ASAP."

Like Hargitay, Paul Rudd handed out cookies to New Yorkers waiting in line to cast their early ballots last week.

In footage shared by Guster drummer Brian Rosenworcel, Rudd, 51, can be heard saying, "I want to say thank you for coming out and voting and doing your part," to people in line in Brooklyn.

END_OF_DOCUMENT_TOKEN_TO_BE_REPLACED

END_OF_DOCUMENT_TOKEN_TO_BE_REPLACED
We and our partners use cookies on this site to improve our service, perform analytics, personalize advertising, measure advertising performance, and remember website preferences.Ok