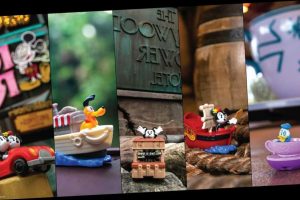 The magic of Disney is coming to McDonald's!

To commemorate their anniversary celebration, Mickey Mouse and Minnie Mouse have inspired a brand-new line of Happy Meal toys at McDonald's.

The toys bring the fun of Walt Disney World's Mickey and Minnie's Runaway Railway—a new ride that opened in Disney's Hollywood Studios in February—straight to the Golden Arches, where customers can collect up to 10 different toys based on popular Disney attractions.

According to the Disney Parks blog, each of the toys can be connected together to form a 10-car train, similar to that of the Disney ride.

Each toy also has a unique function to make the character move as it rolls (e.g. Goofy's arm moves up and down when you push his train forward.)

The line of toys include Goofy on Expedition Everest and Runaway Railway, Pluto riding the Jungle Cruise, Minnie on Dinosaur and Pirates of the Caribbean, Mickey on Space Mountain and the Twilight Zone Tower of Terror, Donald Duck on the Mad Tea Party, and Mickey and Minnie together in their Runaway Railway car. Customers can collect the new toys at participating McDonald's locations now through Dec. 14 while supplies last.

A representative from McDonald's did not immediately respond to PEOPLE's request for comment.

When purchasing a Happy Meal, customers can also enter for a chance to win a vacation for four to Walt Disney World Resort.

Earlier this month, McDonald's also announced that they would be adding a new item to its menu: the McPlant, the chain's very own plant-based protein.

McDonald's will begin testing the new menu item — which they say could be used in burgers, breakfast sandwiches and other items — in select regions globally in 2021 before a wide-scale rollout.