McDonald's Is Bringing Back Spicy Chicken McNuggets for a Limited Time 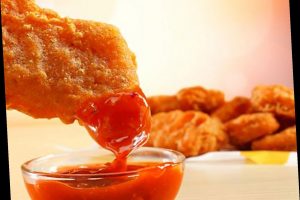 Spicy nugget fans — your prayers have been answered!

McDonald's Spicy Chicken McNuggets are back by popular demand for a limited time. The hot nuggets, which were first introduced in September 2020, quickly went viral and almost completely sold out within two weeks of being introduced.

Similar to the original, the spicy nuggets have the same white-meat chicken but are breaded in a tempura coating that has been boosted with a kick of cayenne and chili pepper.

McDonald's was received a positive response when the nuggets first debuted, and though they were never intended to be a permanent menu addition, it was hinted that they'd be making a return.

According to McDonald's, the limited-time offerings "allow our restaurants to serve new menu items based on the latest industry trends while still maintaining a menu of fan-favorites for their customers."

The spicy McNuggets are currently available at participating locations while supplies last — and if you go on a Thursday you're in for a special deal, too.

The fast-food chain introduced their Throwback Thursdays promotion earlier this month as a nod to the nostalgic lower prices from decades ago. The offer includes multiple fan-favorite menu items that are 35 cents or less.

The promotion is running every Thursday now through February 18. To participate, customers must make a minimum purchase of $1 through the McDonald's app. Once the minimum is hit, the designated menu item of the day will be offered.