McDonald's worker reveals what he does when customers 'demand' fresh fries 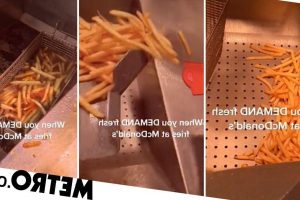 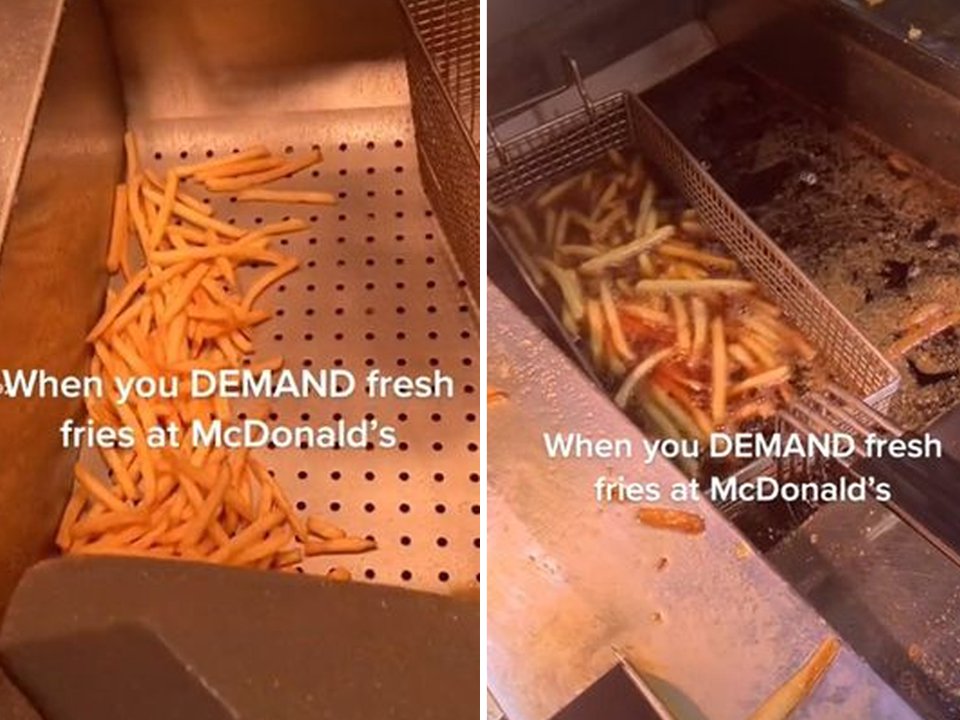 McDonald’s is known for its fast food, and to get meals out to you quickly staff run a very tight ship.

Instead of being cooked to order, items are made in batches and placed somewhere warm, where they’ll stay until they’re popped into your bag.

McDonald’s has protocols so everything goes out fresh, with labels on the pass showing how long something has been there. Once it gets to this time limit, the food is thrown away and not sold to customers.

Despite this, there are a lot of people who want their burgers and fries straight from the cooker, and use a ‘hack’ to get around it.

This hack involves specifically saying you want fresh food, or ordering something with amendments (so it’s cooked to order). And while this is a harmless request in itself, not everyone is polite about it.

Deandre Byars – who goes by @dresav92 online – shared a video on TikTok claiming to be an employee at the chain, with the caption ‘Stop being rude’.

The video shows text that reads ‘When you DEMAND fresh fries at McDonald’s’, and features Deandre using a deep fat fryer like those in commercial kitchens.

Instead of making a new batch of chips, Deandre scoops up some already cooked ones sat in the heating station and puts them in a fryer basket. He dips them into the oil for a few seconds, before taking them out and serving them.

Presumably this placates the disgruntled customer, who will see golden fries and be none the wiser.

Deandre’s time-saving technique proved controversial on the platform, with thousands of comments from angry McD’s patrons.

‘The fact that anyone has to ask or demand should tell you that’s a problem,’ said one person, while another wrote ‘Why do y’all pick a job then get mad when you gotta do the job YOU picked? Make it make sense.’

Others said they didn’t mind as long as their chips ‘aren’t cold, tough or soggy’, which a dip in hot oil would inevitably fix.

McDonald’s has been approached for comment, and we’ll update this when they reply, but as a fry-slinger in my teens I feel the need to step in and clarify.

As long as the correct rules are followed by kitchen and restaurant staff, you don’t need to ask for fresh fries at all. They’re replenished regularly and kept warm for the few minutes that elapse between cooking and serving.

Often when someone demands a new batch be made, they don’t know (or won’t accept) that timings are taken into account and stale food isn’t sold. What Deandre appears to be protesting against isn’t customers looking for crispy chips, but those who are insistent and impolite when asking for them.

‘How is asking for fresh fries rude? I swear people love to do the bare minimum,’ said one person on TikTok, to which Deandre replied saying: ‘Demanding and asking are two different things.’

We should all strive to be kind to service staff, especially those who have control of what you’re eating.

While this tiny act of revenge be a standalone one from Deandre – and not something that happens at your local branch – many hospitality employees know the frustration of being talked-down-to at work.

There’s no need to be rude or demanding with requests, and this attitude tends does the opposite of enamouring you to whoever you’re dealing with.

In any situation, you’ll get far better results by asking nicely than going on a Karen rampage at a minimum-wage worker.

And if the comments on Deandre’s video are to be believed, asking for no salt on your fries is a surefire way to get yours piping hot.