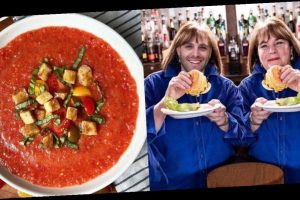 Ever since she poured a bright-pink cosmopolitan into a gigantic martini glass at 9 a.m. on a random morning in April, Ina Garten has been a quarantine hero for the masses.

But Trent Pheifer was a Garten disciple long before her iconic "cocktail hour" Instagram video. And he's made over 1,000 "Barefoot Contessa" recipes to prove it.

Pheifer, 35, is the man behind "Store Bought is Fine" — an Instagram and food blog that document his attempt to re-create every single one of Garten's recipes, which span an 18-year cooking career and 12 published cookbooks.

Pheifer spoke to Insider about how his journey with Garten began, why he credits her with teaching him how to cook, and what "Barefoot Contessa" dishes he believes everyone should learn how to make.

Trent Pheifer's cooking adventure began five years ago, when he was on the cusp of turning 30. 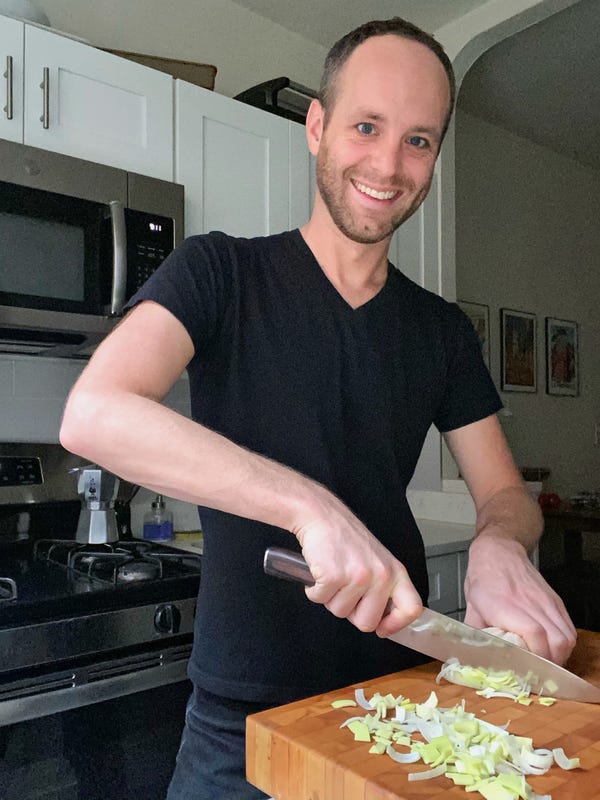 Pheifer was watching "Barefoot Contessa" episodes every week in his New York City apartment, but he had minimal skills in the kitchen. If he wasn't eating out at a restaurant, he was making the easiest dish possible at home.

"It was sad," he told Insider. "I was exclusively eating Trader Joe's, or things like pasta sauce and spaghetti that I threw together. It was a lot of microwaveable food, a lot of sandwiches. The quickest thing I could do so I could go on with the rest of my evening."

Pheifer wanted to improve his cooking skills, but he struggled to teach himself just using food bloggers' recipes and Julia Child's cookbooks. 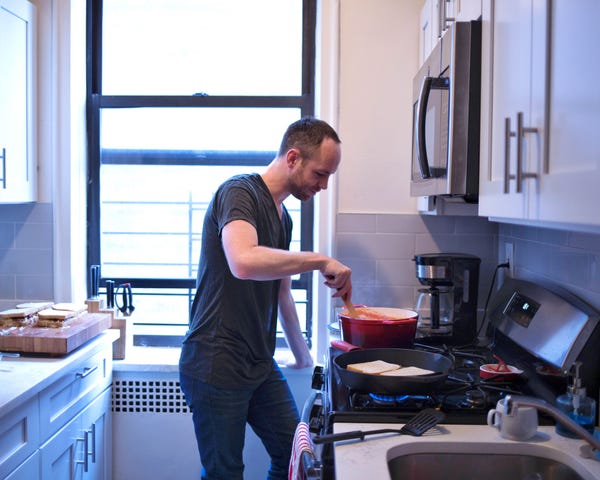 "I started with Julia Child's beef Bourguignon and it was good, but it wasn't great," he told Insider. "And that spring and summer I was making a lot of online recipes. They hadn't been tested, and with such limited skills in the kitchen, I was messing up left and right, spending so much time with food that didn't have any flavor or I didn't know how to improve."

So Pheifer turned to the friendly face that he had been watching on TV every week instead.

"I decided to go with Ina," he said. "I had made some of her recipes in the past and they'd been foolproof."

As a joke, Pheifer started the @storeboughtisfine Instagram — a reference to Garten's classic line reassuring home cooks they don't have to make everything from scratch — and thought he'd keep it up "for a couple of months."

Pheifer got that first burst of cooking confidence when he made two Garten dishes that were incredibly simple — but super tasty. 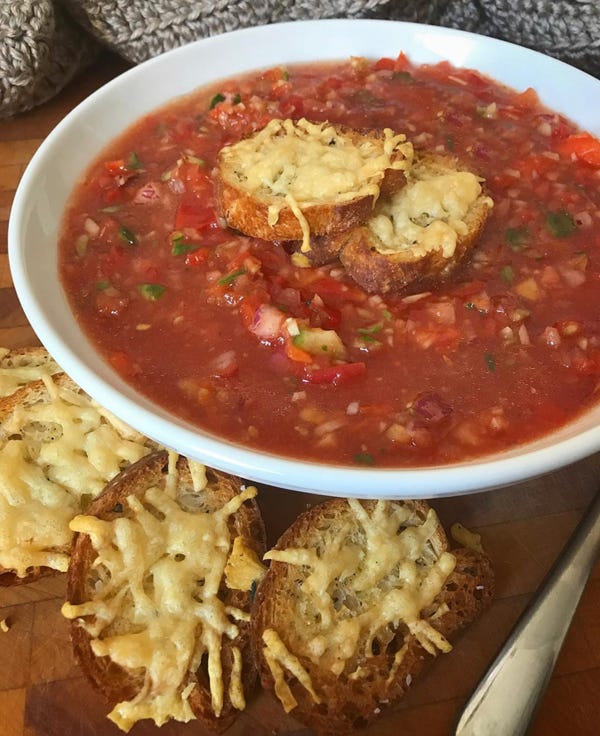 "Her baked shrimp scampi, that was kind of the thing that set it off for me," he said. "It's rosemary breadcrumbs, butter, and butterfly shrimp, baked and poured over pasta. Then I made gazpacho. Those were two insanely easy recipes that were delicious. And it was kind of this epiphany that it doesn't have to be difficult to make good food, you can make delicious recipes with simple ingredients."

And Pheifer was shocked when he was able to successfully make homemade ricotta.

"If you would've said I would ever make ricotta, I would've called you crazy and closed the door," he said. "It seemed like something that was impossible to do at home, and learning that it was actually insanely easy — it's just about trying the recipe and not being intimidated."

"That's one of the great things about Ina," he added. "While she's aspirational, her dishes are very approachable."

As Pheifer first began cooking his way through Garten's recipes, he learned some essential lessons. 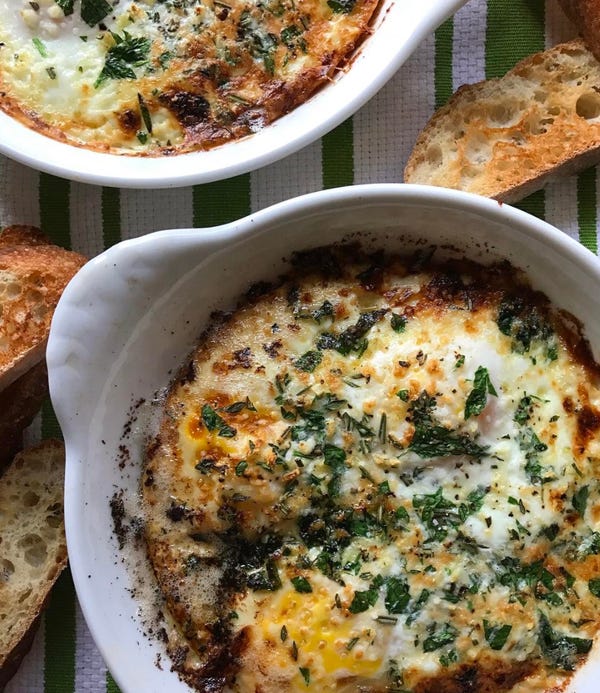 "One of the biggest challenges — and this is living in New York City — is working in a tiny kitchen, and one of the biggest lessons I learned was mise en place," he said, a French culinary phrase that means having everything in place before you start cooking. "Preparing all the ingredients, chopping them and putting them into bowls. I'm not the most organized person in the kitchen, and I'm kind of a sloppy cook, but one of the things that really helped me was preparing."

And Pheifer learned how to trust his instincts in the kitchen thanks to Garten's carefully written recipes.

"When you're first learning how to cook, you always second-guess yourself," he said. "Ina incorporates that into the instructions, things that an amateur cook might not realize. It's so helpful when you have no cooking and baking skills at the beginning."

Pheifer began posting four of Garten's recipes every week on his Instagram, which turned from a joke to a huge hit. 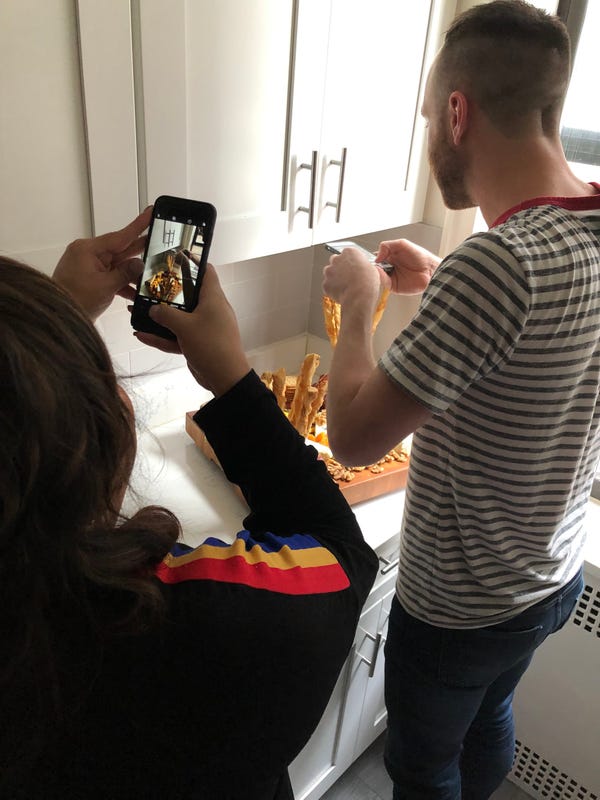 "It turns out that taking photos every single day of every thing you've eaten for five years magically improves your photos!" he said with a laugh. "You learn over time what works and what doesn't."

Pheifer learned how to find the natural light, cooking many of his dishes during the day and later even buying a special bulb so that he wasn't "always chasing the sunset."

Even Garten found out about Pheifer's project, which they talked about during a chance encounter in Paris. 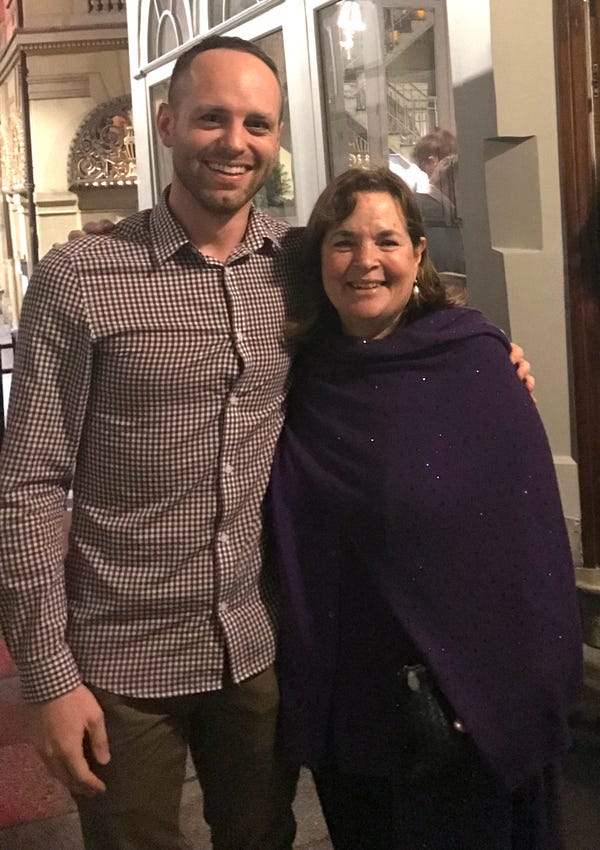 Pheifer couldn't believe his luck when he ran into Garten and her husband Jeffrey at a restaurant in Paris — a city that the "Barefoot Contessa" star and her own cooking hero Julia Child both famously adore.

"They could not be more sweet," Pheifer said of Garten and Jeffrey. "She thanked me for everything I was doing. It was nice to know that Ina gives it a thumbs up."

"I couldn't put into words how special that night was," he added. "I think somebody was looking out for us — probably Julia Child."

Pheifer has now made more than 1,000 Garten dishes, but he has a clear favorite. 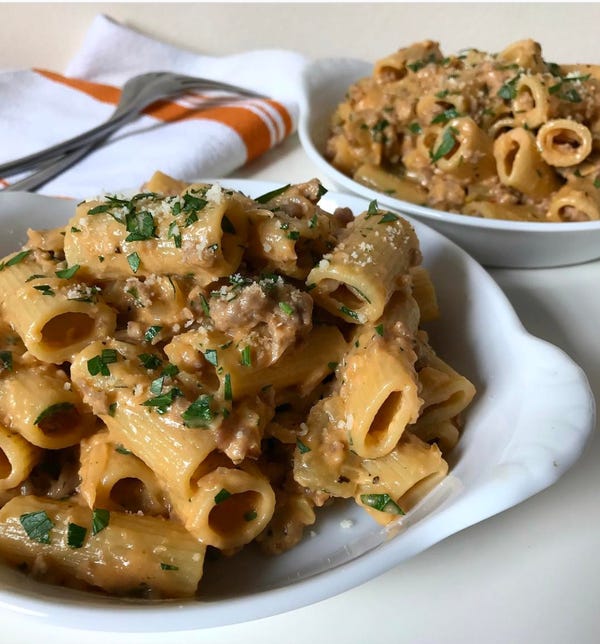 "My go-to that I tell everyone and scream from the rooftops is her rigatoni with sausage and fennel," he said. "It's such a crowd pleaser, it's always a hit."

Pheifer is also a huge fan of Garten's potato fennel gratin ("absolutely to die for"), cauliflower toast ("one of the most divine appetizers ever"), and mocha icebox cake ("everyone loves that for their birthdays").

For novice chefs who are hoping to build their confidence in the kitchen, Pheifer recommends starting with Garten's roast chicken. 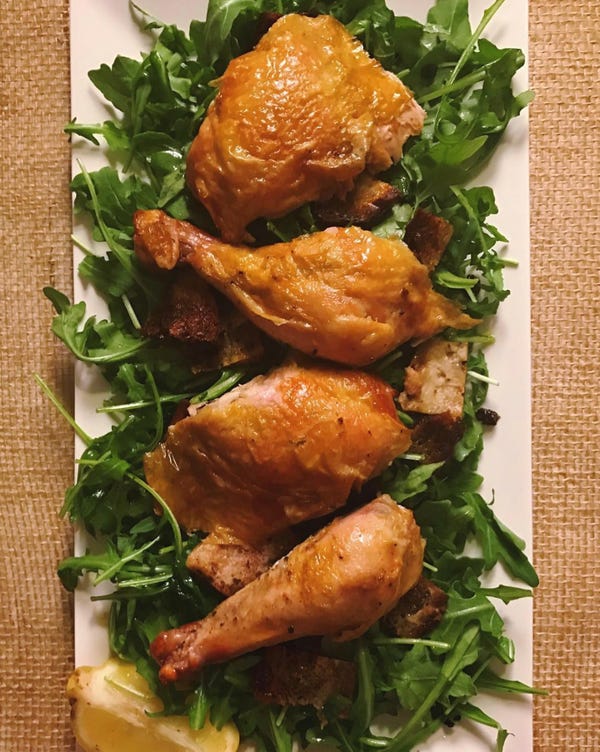 Pheifer is a big fan of Garten's roast chicken with bread and arugula salad from her "Make It Ahead" cookbook.

"Roasting a chicken is classic Ina, and so much easier than someone with very little experience in the kitchen might expect," he said. "What makes this one special is the country bread that roasts beneath the chicken, sopping up all the delicious drippings."

"Once out of the oven, you cut up the chicken and bread and plate it on a bed of arugula dressed with a garlic Dijon vinaigrette. No need to make a side — it's a one-dish dinner that will leave everyone smiling."

But it wasn't always smooth sailing. There was one Garten recipe that gave Pheifer a lot of stress. 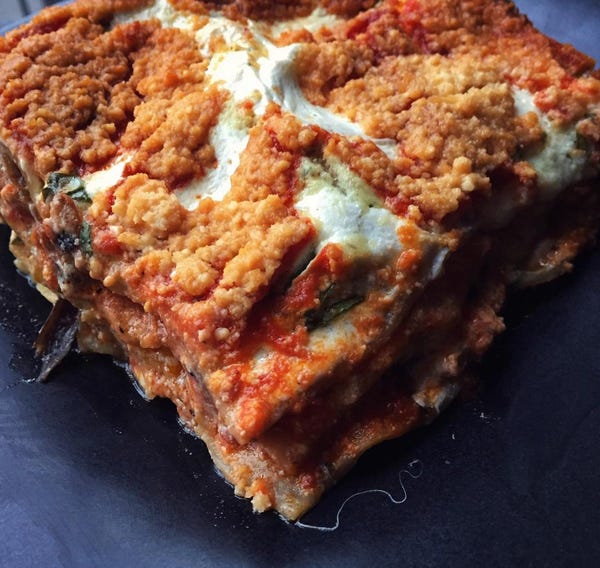 "The only time I had a meltdown and almost threw a pan of roasted veggies across my apartment was with her roasted vegetable lasagna," Pheifer said.

"It's an absolutely delicious dish, but it requires so many pans and dishes. You've got three sheets of roasted vegetables, and you're making a Béchamel sauce."

Pheifer has less than 250 Garten recipes to go, but he's found that one of the most important lessons he's learned doesn't really have to do with food at all. 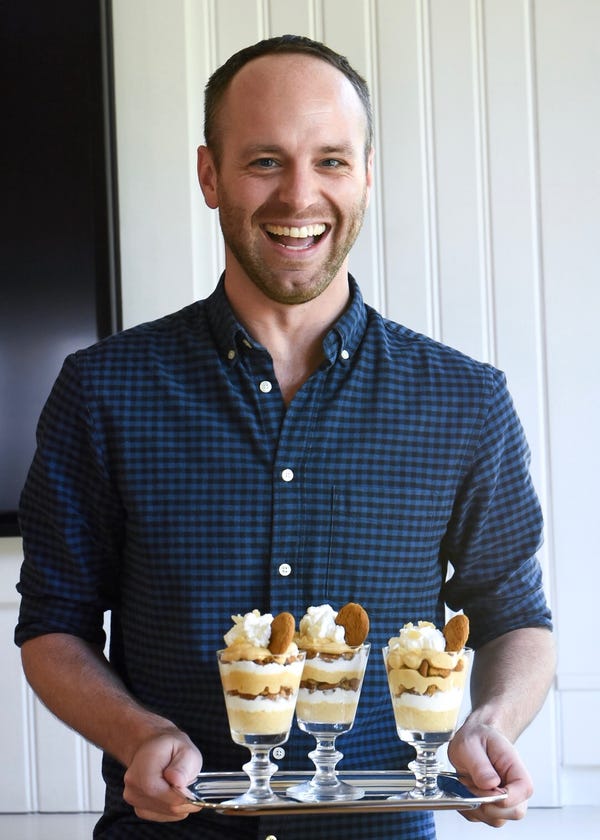 "Cooking is not about the food," he said. "Cooking is about showing love. I think early on, I wanted to cook to impress — hence me starting with the beef Bourguignon. And while that's nice every once in a while, I hate being in the kitchen the entire time that friends are over."

"So it's fine to do some store-bought items and make things ahead so you can actually enjoy it. That's one of the best lessons Ina taught me — don't spend all the time in the kitchen when you're entertaining."

And Pheifer isn't surprised that Garten has become a cooking hero to so many others, especially in quarantine. 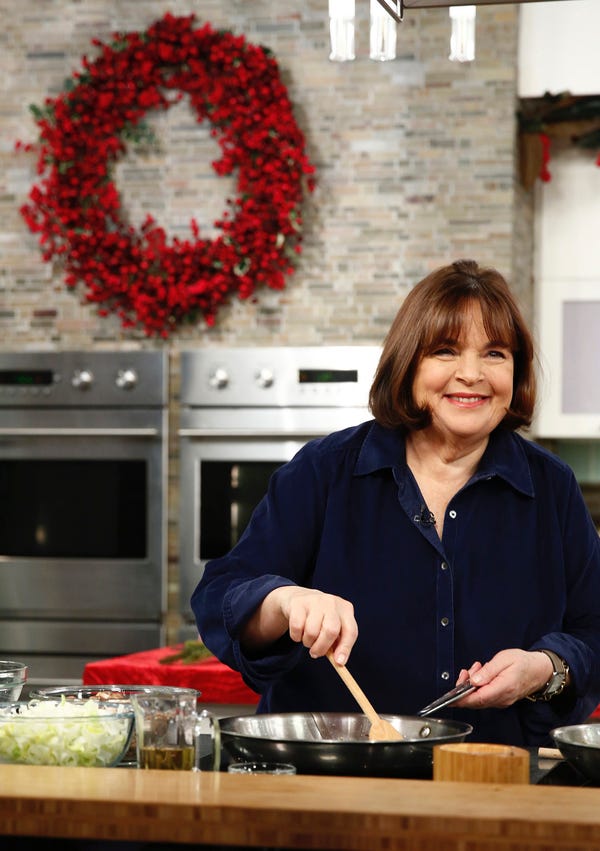 "The way she approaches food, she often thinks about the comfort food from her childhood and how she can update that — giving us those foods we've always loved with a modern twist," Pheifer said.

"And one of the biggest things is how she tests her recipes. Once she thinks she's perfected the recipe, she hands it to an assistant who makes it based on how it's written and — if there's any issues or problems — she incorporates the answers into her recipe."

"Even early on, I had very few kitchen fails with her," he added. "Of all the people I've cooked recipes from, she's the one who hits it out of the park."