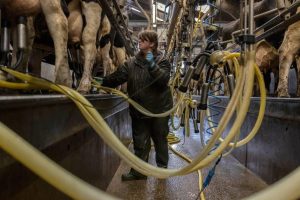 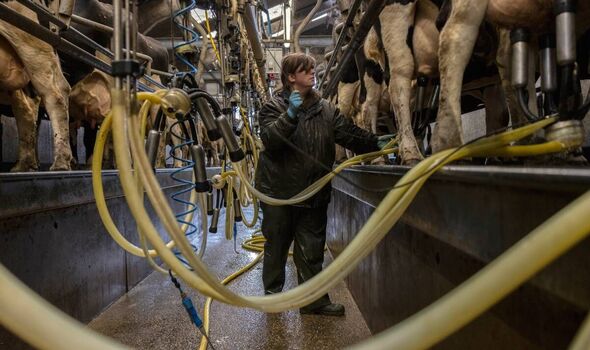 Hard-pressed shoppers already face soaring egg prices, with some costing almost twice as much as they did a year ago. Now milk producers have warned pints could disappear from the shelves if prices paid to farmers fall any further.

In the past month a third of eggs on sale in the biggest nine supermarkets rose in price, according to The Grocer magazine.

The biggest increase over the past month was a six-pack of free-range eggs at Asda, up 18 percent to £1.95. This meant it was now 30 percent more expensive than at the start of 2022.

Meanwhile, experts believe dairy commodity prices will slip back this year, amid a slump in global demand.

As a result, trade magazine The Grocer understands that some retail buyers are already looking to cut the price they pay for their milk and other dairy products.

The savings would be passed on to shoppers.

But with the cost of production this year set to stay around 45p per litre (ppl) due to the continued high cost of feed and fuel, experts warned that any big farmgate price cuts could potentially collapse the milk market by disincentivising farmers from producing milk.

John Allen, from Kite Consulting, said: “We have never seen the gap between the cost of production and commodity levels as large as they are now.

“If you were to drop farmgate prices down to that 35ppl commodity level, there would probably be a shortage of milk in quarters three and four.

“That’s the risk – and retailers need to get appraised of this market. Making knee-jerk reactions by cutting prices now could be painful later on, as we’ve seen in eggs.”

Analysis of Assosia data by The Grocer revealed that of the 171 egg lines available from the end of November to January 2 in the traditional big four supermarkets – plus Aldi, Lidl, Waitrose, Iceland and Co-op – 61 rose in price.

Egg suppliers said availability should soon improve after a peak in demand over Christmas.

But Robert Gooch, boss of the British Free-Range Egg Producers Association, said three months should be allowed for suppliers to up production and bring an end to shortages.

He said: “It is too little too late to make any difference to supply in the short term. The focus now is looking at producers coming back in and seeing if the rises that are slowly filtering through can cover costs.”