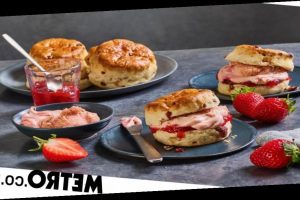 It’s an age old debate – what do you put on a scone first?

Some prefer jam them cream (the Cornish way), others like cream then jam (the Devon way).

A Yougov survey in 2016 found that 61% of people prefer it the Cornish way but it’s still sure to cause conflict.

M&S has decided to settle the argument by just combining the two and creating a strawberry clotted cream.

It combines the thick rich taste of clotted cream with sweet strawberries.

Posting on social media, M&S said: ‘What comes first – jam or cream? Now you don’t have to choose thanks to our new strawberry-flavoured clotted cream. It’s a sweet scone game changer – and it’s in store now.’

The supermarket added: ‘Whether you do it the Cornish way or the Devonshire way, the age-old debate of what to top a scone with first, often results in a heated debate over a cup of Earl Grey. Until now!

‘M&S introduces the first-ever product to silence both parties, by combining jam with clotted cream and making one ultimate afternoon tea delight.’

But the idea proved to be pretty controversial.

One person said: ‘What an abomination.’

Another added: ‘No. Just no. There are some things you simply don’t mess with – except you just have.’

But others were eager to try and asked if it was available in their local store.

Some pointed out that despite the new product, M&S had still put jam on the scone, followed by the flavoured cream.

What are your thoughts on the new clotted cream?