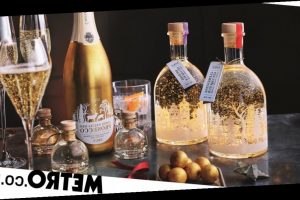 It seems a lot of people have the Marks and Spencer snow globe gin on their Christmas list as the brand is setting limits on the number of bottles each customer can buy.

The gin liqueur, which comes in rhubarb and clementine flavours, is filled with 23-carat edible gold-leaf flakes.

To make it extra festive, the bottles themselves include lights and there’s a skyline design around the side.

You can shake the bottle up to create a snow globe effect, hence the name.

Each one costs £18 – but it’s sold out online and people are desperate to get their hands on one in store.

Stores have had to put a limit of two per customer can as they sell out in hours after every restock, with people buying up lots of the stuff.

Some people are even drinking the gin and reselling the empty bottles on eBay for more than they cost for in the M&S stores. Listings for up to £49.99 have been spotted on the site.

Only approved sellers can sell alcohol on the site but anyone can list an empty bottle.

On Facebook marketplace, people are listing full bottles for £40 – more than double the original price.

The M&S twitter feed has been flooded with people asking the team to check stock in stores up to 25 miles away from where they live.

One person said: ‘This is the third morning now I’ve woken up to get to @marksandspencer at opening time just for the a bottle of the snow globe gin. Still no luck!! @marksandspencer please restock your Doncaster stores, it’s the only thing I want for Christmas this year.’

A spokesperson from M&S replied: ‘It’s flying off shelves as soon as we put it out. It’s super popular.’

Another person posted: ‘When are you going to have the Christmas glitter globe gin back on sale, I’ve been to 5 stores today across derby/nottm and none in stock?’

‘We’ve been 7 times!! We’re giving up, we’ve spent more money on petrol travelling to the store than what the actual gin costs,’ someone else said.

M&S said it is working to get more stock of the gin in where possible but it won’t be restocked online and customers just have to keep checking local stores.

You can tweet M&S to ask them to check local stores but the stock checker isn’t live so you do risk it being sold out by the time you get there.

END_OF_DOCUMENT_TOKEN_TO_BE_REPLACED

END_OF_DOCUMENT_TOKEN_TO_BE_REPLACED
We and our partners use cookies on this site to improve our service, perform analytics, personalize advertising, measure advertising performance, and remember website preferences.Ok