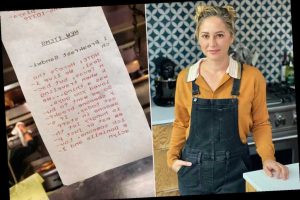 Strangers from all over the world are ordering free food for others with heartfelt notes attached from Top Chef winner Brooke Williamson's restaurant.

Williamson, the owner of Playa Provisions in Playa del Ray, Calif., first shared an Instagram photo on Thursday of an order of garlic fries, ceviche and the Tripel Pretzel Burger with a note that read: "We love you!"

Williamson, 42, captioned the post, "FYI, when you order through our website @playaprovisions for pickup, the order gets sent to the kitchen exactly how you write it in your browser. To whomever just sent this, you have no idea how many people you just made smile. Thank YOU and we love you too!!!"

The post seemingly inspired people to get creative, because more and more orders began pouring into the restaurant with unique notes.

On Sunday, Williamson shared an order of a breakfast sandwich with a note that read, "Here's the deal. We live in Texas, but back when traveling was a thing…we loved you guys. So we want to buy someone breakfast today. If someone in staff is hungry let them eat or just pick someone. Love Donielle and Jaclyn."

"Forever grateful for your love and support… above and beyond 🙌🏻♥️," Williamson captioned the photo of the second order.

Williamson continued to share photos of orders on her Instagram Story on Sunday, with many purchasers telling the celebrity chef to give the food to staff members or people in need of meals.

"There are no words…all will be paid forward," she wrote alongside a photo of one order of corned beef that was placed by "friends from New Mexico."

Alongside an order of one bottled barrel aged Old Fashioned for staff, Williamson said, "heart exploding…thank you guys so much! We can't even begin to describe how much this means to us." An order of the lunch tacos had a note that suggested the meal could be given to first responders, to which Williamson wrote, "Thank you! We treated the local fire department today because of all of your generosity."

"This new trend is the best part of 2021 so far," she said of an order of chicken and brie that came from Tucson, Arizona. "Give this order to someone who needs it," the note said. Williamson first competed on Top Chef for season 10 and was the runner-up, losing out to Kristen Kish. She returned four seasons later for Top Chef: Charleston, and was declared the winner. She was also the winner of the Food Network's Tournament of Champions last year.

In December, Williamson penned an op-ed for The Los Angeles Times and revealed that she has had to close three of her four restaurants — the last remaining being Playa Provisions — due to the COVID-19 pandemic.

"Restaurants are being treated as scapegoats, blamed for a spike in COVID-19 cases, without evidence," she wrote, before going on to lament about Los Angeles County's dining ban. "So what is our plan for survival?" Williamson said. "It changes almost daily. But if I had to answer that question today, I'd say we're crossing our fingers that we can make it through the next few weeks of uncertainty, with the hope of reopening outdoor dining and obtaining significant financial aid."

She added: "In other words, we're awaiting an industrywide Hail Mary."