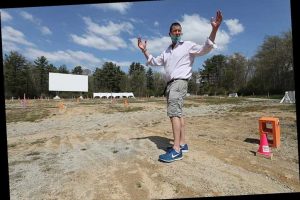 Dave Andelman, CEO of the Boston-based food television series Phantom Gourmet, has resigned from his role following backlash from recent Facebook posts he shared about the Black Lives Matter movement.

He also stepped down from his role at the Mendon Twin Drive-In, a drive-in movie theater he owns with his brothers Dan and Michael. Dan Andelman, who hosts the program, will take over as CEO of Phantom Gourmet, the company announced in a Facebook post Tuesday.

Dave’s resignation comes after he shared a slew of posts to his personal Facebook account over a period of 10 days that disparaged the current protests against police brutality.

His account has now been made private, but screenshots of his posts have circulated online. They included comments like “Defund potatoes, not police” and suggested that Boston restaurants offer “touchless, curbside looting.”

In other posts, he shared his support for NFL quarterback Drew Brees, who came under fire for comments he made regarding the #TakeAKnee movement and has since apologized.

“We don’t take a knee here,” Dave wrote on Facebook. “This is America, not Game of Thrones. Your desperate need for approval, from those who hate cops and country regardless, is pathetic. Have a great day!”

Dave apologized for his posts on Saturday night on the Phantom Gourmet page, writing: “I maintain my own Facebook Page. I made comments on that page that were inappropriate, hurtful, and wrong regarding the Boston protests,” he said. “I support everyone’s right to free speech and free assembly. I, too, desire racial and social justice. My record of philanthropy and business reflects this.”

Following the backlash, WBZ-TV said it would place the Phantom Gourmet TV show on hiatus until further review.

In the Tuesday Facebook announcement, new CEO Dan Andelman apologized “that so many have been hurt” by his brother’s comments.

“This is NOT what Phantom Gourmet is about and we are very sorry,” he said. "Our hard-working employees and loyal fans deserve better. So, we are taking swift and decisive action today and we want to make it clear that these types of divisive comments are not consistent with our core values."

The post outlined the ways Phantom Gourmet is committing to change in the future, including prioritizing finding and promoting black-owned restaurants and food service companies, implementing diversity and inclusion training.

The company will also educate employees on Black Lives Matter and systemic racism and “complete a stem to stern review of company policies and corporate culture to make sure controls are in place so nothing like this ever happens again.”