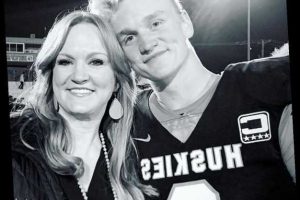 Ree Drummond's eldest son is heading off to college!

On Saturday, the Pioneer Woman star, 52, posted an emotional photo on her Instagram Stories of her son Bryce getting ready to leave for his first year at school.

In the sweet image, Bryce, 18, is seen outside with his brother Todd, 16, and foster brother, Jamar, 18. Bryce was pictured hugging Jamar goodbye while Todd stands behind the pair.

"Bryce is heading to college today 😢," Drummond wrote on top of the photo. "Just said bye to his brothers 😭😭😭."

With Bryce being Drummond's first son to leave the nest, she teased, "I'll be okay in 2085." According to Drummond's blog, Bryce will be playing football at the University of North Texas. He graduated high school a semester early and took college courses over the summer and fall to satisfy his high school requirements.

"Bryce is really happy, and Ladd and I couldn't be more excited for Bryce that he'll be able to continue playing football—and we're so proud of him for all the hard work that got him there," the proud mom wrote last month. "Excuse me while I go cry for four hundred years."

The Food Network star previously talked about Bryce entering his senior year in high school, sharing some of his senior pictures on Instagram in July.

"My kid is gearing up for his senior year. I can’t believe he’s not a little blonde pookie head anymore," Drummond wrote at the time. "I guess I’ll have to settle for big blonde pookie head. Proud of you, Bryce! Keep workin’, keep growin’, keep the faith."

And in September, Drummond celebrated Bryce's 18th birthday remarking at how he grew up so quickly in front of her. The cookbook author also shares daughters Alex, 23, and Paige, 21, with husband Ladd.

"Before he was a quarterback, he was a cowboy," Drummond wrote, sharing throwback photos of Bryce on the family's Pawhuska, Oklahoma ranch. "Can’t believe he’s 18…it went by so ridiculously fast. His dimples are still the death of me. 😂 Happy birthday, Bryce! Love you, son."