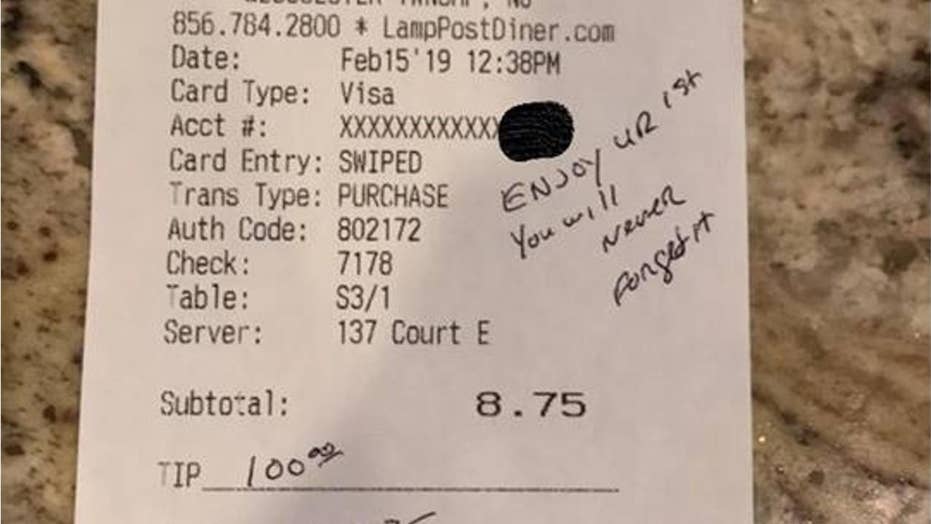 Brian Cadigan, of Sewell, N.J., praised a ‘pleasant’ police officer, in a recent facebook post, after the officer left a $100 tip on a bill of $9. Cadigan’s daughter was the officer’s waitress and in addition to the $100 tip, the 7-month pregnant waitress received a lovely note of encouragement from the officer telling her to, ‘Enjoy your 1st, you will never forget it.’

A police officer in New Jersey left a touching note for a waitress – along with a $100 tip – after learning she was pregnant with her first child, according to the server’s father.

Brian Cadigan, of Sewell, N.J., shared the sweet story on Facebook over the weekend, posting a picture of the officer’s receipt and praising him for his generous act.

FAST FOOD CUSTOMERS CONTINUE TO LINE UP FOR RESTAURANT, DESPITE IT BEING ON FIRE

“You always hear about how bad the police are, how they treated you like dirt, how they are on a power trip,” Cadigan began his post. “Yes I am sure there are some bad apples, but most of them are just doing their jobs, they deal with the worst of society every day and have to keep going back [every day] and deal with it all over again.”

Cadigan then went on to praise the police, in general, for the things they do that “most people will never know about” before sharing the story of his daughter’s run-in with the officer who walked into the Lamp Post Diner in Gloucester Township on Friday.

“My daughter is a waitress at a local diner, she is also 7 months pregnant and working still to save as much money as she can,” Cadigan wrote, explaining that the young woman attended to the lone, “pleasant” officer who came in alone for lunch.

MAN PRETENDS TO GET STOOD UP AT RESTAURANT ON VALENTINE'S DAY, GETS FREE MEAL

When he was done, Cadigan said the officer signed the check and “left her a $100 tip on a $9.00 ticket and the note simply said ‘Enjoy your first, you will never forget it.’”

“What a wonderful person to not only leave a VERY generous tip, but a lovely message,” he wrote. “I don't know you [Mr.] Police Officer, but you made my little girl cry, and made her year.

“Thank you, I always had the utmost respect for Officers, but you went above and beyond not just an officer, but a beautiful human being. God Bless.” 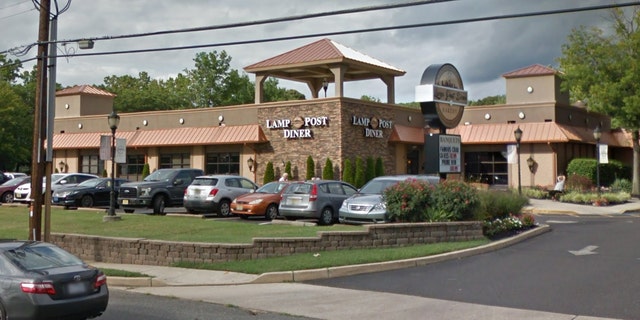 The waitress’ father said the police officer made his daughter’s "year" after leaving the sweet note following lunch at the Lamp Post Diner in Gloucester Township, N.J.
(Google)

Cadigan has since confirmed to Fox News that the officer who left the tip would like to remain anonymous.

“We love our police officers, and they are always cast in a bad light, sometimes justifiably,” he told Fox News. “I'm just glad that people see that they are real live human beings behind the badge, and strive to do good.”