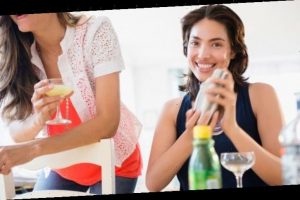 He invented the cocktail at The Townhouse Bar in Knightsbridge, London, initially calling it the ‘Maverick Martini’ after a gentleman’s club in Cape Town.

In an interview with The Buyer, he said: “The drink is very evocative and tantalising.

Fill two martini glasses with ice and set them aside, or put the glasses in the freezer.

Cut two passion fruits in half and scoop the seeds into a sieve over a small bowl.

Use a spoon to press down on the seeds and allow the juice to seep through into the bowl.

Fill the shaker up halfway with ice, put the lid on and shake the mixture for at least 30 seconds.

Some cocktail shakers have a built-in strainer, but if yours doesn’t use a coiled strainer and strain the drink into the cold martini glasses.

If you used ice to chill the glasses, get rid of the ice before pouring the drinks.

Garnish the drinks with half a passionfruit, and top it up with prosecco.

Alternatively, each drink should come with a shot of prosecco.

If you aren’t a fan of prosecco, you could opt for champagne.

Don’t forget to take a few pictures to show off your cocktail-making skills on Instagram!