Home » Food & Drink » Royal recipe: How to make the winning Platinum Jubilee Pudding – ‘it can’t get any better’

Royal recipe: How to make the winning Platinum Jubilee Pudding – ‘it can’t get any better’ 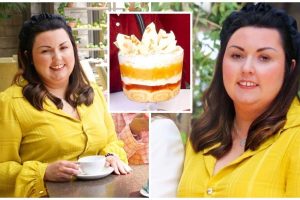 Camilla announces the winner of the Platinum Pudding competition

Camilla, Duchess of Cornwall appeared at the very end of ‘The Jubilee Pudding: 70 Years in the Baking’ to announce the winner of the pudding competition. The competition was judged by many top chefs and bakers around the country, including Dame Mary Berry. Who won The Queen’s Jubilee Pudding?

Jemma Melvin’s Lemon Swiss Roll and Amaretti Trifle was awarded the title of Platinum Pudding for The Queen’s Jubilee celebrations in a unanimous decision by judges.

The dish will become part of British food history, following in the footsteps of the Coronation Chicken and the Victoria Sponge.

For the Swiss rolls

For the lemon curd

For the St Clement’s jelly

For the Amaretti biscuits

For the chunky mandarin coulis

For the jewelled chocolate bark

To make the Swiss rolls, preheat the oven to 180 Celsius. Grease and line two Swiss roll tins with baking paper.

In a large bowl, beat the eggs and sugar together with an electric hand whisk for approximately five minutes.

Using a metal spoon, gently fold in the flour. Divide between the two tins and bake for 10–12 minutes.

Sprinkle some extra caster sugar on two sheets of baking paper then turn the sponges out onto the sugared paper.

Peel off the paper from the underside and, while still warm, roll them both up from the short end into a tight spiral using the paper to help. Leave to cool.

To make the lemon curd, place the egg yolks, granulated sugar, butter, lemon zest and lemon juice in a glass bowl over a saucepan of simmering water.

Whisk until combined and whisk continuously as the curd cooks until thickened. This should take about 15 minutes. Pour into a clean bowl and set aside to cool.

To make the St Clement’s jelly, soak the gelatine leaves in cold water for five minutes to soften.

Bring to a simmer over a medium heat, stirring occasionally until the sugar has dissolved. Remove from the heat and discard the peel.

Squeeze the water out of the gelatine and stir into the pan until dissolved then leave to cool. Squeeze the lemons and oranges, so you have 150ml of both lemon and orange juice.

Stir into the pan then strain the jelly through a fine sieve into a jug and chill until cool but not set.

To make the amaretti biscuits, preheat the oven to 180 Celsius. In a large bowl, beat the egg whites until firm.

Mix the sugar and almonds gently into it. Add the amaretto and fold in gently until you have a smooth paste.

Place some baking paper on a baking tray and lightly brush with butter or oil. Using a teaspoon, place small heaps of the mixture approximately two cm apart, as they will expand during cooking.

Bake for approximately 15–20 minutes or until golden brown. Remove from the oven and set aside to cool.

To make the chunky mandarin coulis, strain two tins of mandarins. Discard the juice and put the fruit into a saucepan with the sugar and heat gently until broken down.

Remove from the heat. In a small bowl, stir the arrowroot with two tablespoons cold water to make a paste, then add to the warm mandarins.

Add the lemon juice and mix well before pouring into a large bowl. Strain the remaining two tins of mandarins and add the fruit to the bowl then leave to cool completely.

To make the jewelled chocolate bark, if the peel feels wet or sticky, roll in the caster sugar to absorb any moisture.

To assemble, unroll the cooled Swiss rolls and spread with the lemon curd. Roll back up again and slice one into 2.5cm slices and place upright around the bottom edge of the trifle dish so the swirl is visible.

Slice the other Swiss roll into thicker pieces and use these to fill the bottom of the dish, ensuring the top is roughly the same level as the slices that line the edge. Use off-cuts of sponge to fill any gaps.

Pour the St Clement’s jelly over the Swiss roll layer and set it aside in the fridge to completely set. This will take approximately three hours.

Once set, pour over the custard then arrange a single layer of amaretti biscuits, keeping a few back for the top.

Pour over the mandarin coulis. In a large bowl, whip the double cream until soft peaks form then spoon this over the coulis.

Crumble over the reserved amaretti biscuits and decorate with the chocolate bark shards.

Judge Monica Galetti said: “I love lemon and sometimes people hold back, and they’re scared to put that lemon into it, and as you’re eating it you’re thinking, ‘oh it can’t get any better.’

“I got chunks of the amaretti biscuit that have soaked up the cream and they’re chewy and I am so happy right now.”