Ryan Reynolds' Hilarious New HighKey Commercial Has Naughty Undertones: 'It Involves a Bit of a Wink' 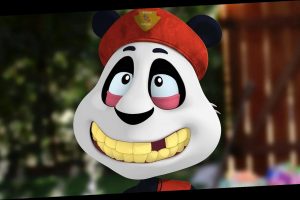 We are, um, addicted to Ryan Reynolds' new HighKey commercial.

"Sugar Panda is this cute, lovable character," Reynolds tells PEOPLE. "We created a bit of a backstory for him — somebody who had fallen from grace, who was a very popular spokesperson but ended up having a bit of a problem."

In the commercial, Sugar Panda, who is voiced by Reynolds, pretends to be a kid scout going door-to-door selling cookies. As he attempts to persuade a potential customer to buy his sugar-filled cookies, his heart stops for a few seconds and his nose starts to bleed. "This particular spot was just one of those things that I loved as a kid, I loved Girl Scout cookies," he adds of the new commercial. "I would happily inject Samoas into my eyeballs if I could. So we just wanted to use that as a fun way to raise awareness that there was a less sugary option out there that is just as delicious." It's important to Reynolds to actually enjoy the products he produces ads for — and HighKey cookies are a favorite at home with wife, Blake Lively, and their three kids, James, 6, Inez, 4, and Betty, 1. "My kids love these, and I don't feel bad about letting them have it. Also, in fairness, it occupies them for about 15 minutes, which is always lovely," he jokes. He also admits that the cookies help him curb his own sugar cravings. "I'm a bit of a sugar addict, so anytime I can find something that is just as delicious as products containing sugar but doesn't actually have the same pitfalls, then I'll take it," he says.

But the actor always makes an exception for sugar when his wife bakes for him. "There's a time and place for everything," he says. "I mean, every aspect of life of mental and physical involves some sort of balance."

Check out the full HighKey Sugar Panda commercial above.