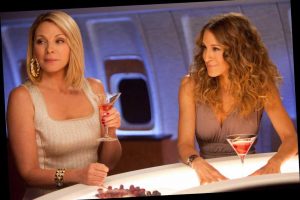 Any fan of Sex and the City knows Carrie Bradshaw's signature drink is a cosmo, but in real life, it was an acquired taste for Sarah Jessica Parker.

"To be honest, I really do love a cosmopolitan. I don't know how to make them well, but I genuinely love them," Parker, 55, told New York magazine's Grub Street for their Grub Street Diet column.

"Strangely enough," though, her love for the pink cocktail "didn't happen until long after I stopped shooting the show and the movies," she added.

"I would be served them at restaurants, or people sent them over, and I was always very grateful," Parker recalled. "But I didn't really drink the cocktail until after we finished the show. I went to some place and had an exquisite one and then it started."

Carrie Bradshaw, Is That You? Sarah Jessica Parker Indulges Our Sex and the City Fantasies By Drinking Cosmos in Real Life

"And when I'm shooting, I have a full, massive, crazy breakfast," she said. "When I'm home and going to work on my own, I'll get up really early and just have coffee."

"I don't want to suggest our entire conversation at dinner is grading the meal, but we definitely are consciously enjoying it," she said.

Despite her actor husband's haste over their family finishing their food, Parker gives Broderick, 58, mad props for his culinary skills.

"I don't look at recipes nearly as much as [Matthew] does, and he's not daunted by a lot of steps. He's very still; he doesn't run around the kitchen like I do," she said. "He's enormously patient, he's tranquil and he loves it. He's a fantastic cook. I cook all the time too, but I don't read recipes nearly as much."

Broderick is also the type of chef not to throw anything out that might be of use in the kitchen later. As Parker explained, "We save everything here. Matthew saves every Parmesan rind. If we have shrimp, we always try to make a stock with the shells, because it's so good and smells incredible."

"We always save the bacon grease. We have fat from a Spanish ham that Matthew bought for my son for Christmas, which we saved for cooking," she continued. "I'm like, 'Okay, we have a whole section of our fridge dominated by fats.' We'll be like, 'Matthew, do we know when this is from?' And he'll reply, 'Doesn't matter, doesn't matter.' "