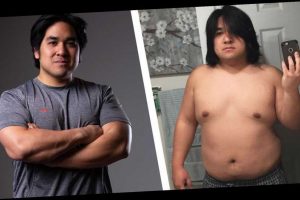 “When I went off to college,” Huy Tran says, “I became an eating machine.” Up until then, he’d been an average kid, fairly active. He played sports and biked all over down. Yet when he went to college he hoovered up whatever food was available, in huge amounts. Reflecting on it now, the 33-year-old lab scientist and photographer says, “I believe that I had developed a binge eating disorder and was addicted to food.”

He gained 70 pounds in about a year and a half, and he carried that weight with him. At his heaviest he was 264 pounds and felt awful, with tight hamstrings and persistent back pain. He’d sweat if he had to walk too far. He couldn’t fit into his suit jacket for a friend’s wedding; he had trouble getting down the stairs for a night-time drink of water. “I was 31 years old and my body was falling apart,” he says. “Enough was enough.”

He started by taking pictures of himself. Then he downloaded MyFitnessPal, setting a calorie goal that would drop one pound a week. He ditched the fast food and starting prepping meals of salads, roasted veggies, and lean protein. Sugary drinks went out the window, and he began using a food scale.

As a motivator, he signed up for a 5K race he vowed to complete in the spring, then enrolled in a couch-to-5K program. “The first few weeks were hell,” he says. “I could barely jog for 60 seconds at a time and my legs were constantly sore.” He fought through that, and when he could run a 5K he got a gym membership and started lifting, beginning with full-body and then going into a PPL (Push-Pull-Legs) split. He didn’t have a trainer, but his friends kept him motivated and accountable. 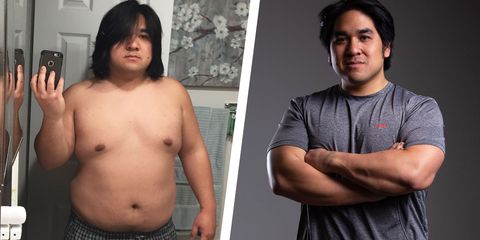 After a year, he’d lost 35 pounds; now, two years later, he’s down 46 pounds but has also gained a lot of muscle. “I don’t think that I have ever been this fit in my entire life,” he says. He can lift nearly twice his bodyweight in most lifts, and his 5K time is under 27 minutes. He feels more confident in himself, and in control of his body. He’s much more disciplined; his mental toughness has increased. “I get comments from people nearly every week saying something about how different and good I look or how they are so proud of me,” he says. He thinks he might lose another 15-20 pounds. “I want to keep going and be the best version of myself that I can be.”

“Losing weight and becoming healthy has to become a lifestyle and not a fad if you want to be successful and have it stick,” he says. Fad and crash diets can feel like punishment, and are hard to stick to. Instead, he says, find exercise you enjoy and a sensible diet. “Eat healthier and move more,” he says. “It goes a long way.”