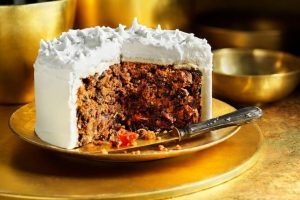 Christmas Day is just a few weeks away and if you’re worried about not having a traditional Christmas cake to serve, don’t panic, Clodagh McKenna has shared her last-minute Christmas cake recipe which can be made now, in time for the big day.

Appearing on This Morning, Clodagh who demonstrated how to make a 25cm cake, said: “I like loads of fruit in mine, I do sultanas, raisins, cherries, candied orange and currants.

“Then I cover it with brandy, you could use stout or whiskey, I like brandy because it’s sweeter, it tastes better in a fruit cake, and leave it to soak overnight.”

When making the cake mixture, the TV chef prefers to use light brown sugar as it gives a caramel flavour, but you could use caster sugar, which makes it richer, and dark brown sugar makes it even richer.

“In my mind, light muscovado sugar is beautiful for it,” she added.

The spices that get added to the cake mixture are also “up for debate” as everyone has their preference.

Clodagh said: “My mum puts whiskey in, instead of brandy and then cinnamon, but I don’t like cinnamon, I like allspice and nutmeg – lots of fresh nutmeg and lots of fresh orange and zest.” She also likes to add blanched, chopped almonds to give a “nutty flavour”.

150ml brandy, plus extra for feeding

A pinch of salt

Half a teaspoon of freshly grated nutmeg

Half a teaspoon of mixed spice

Grated zest of one lemon

Grated zest of one orange

1. The day before you want to make the cake put the dried fruit, cherries and mixed peel in a bowl. Pour over the brandy and mix as evenly and thoroughly as possible. Cover the bowl with a clean tea towel and leave overnight or for at least 12 hours so that the fruit absorbs the brandy.

3. Grease and line a 20cm round cake tin or an 18cm square tin with baking parchment. Clodagh recommends tying a band of brown paper around the outside of the tin for extra protection. “I grease it first then line all of the sides as well, because after all this effort, what you don’t want to happen is that it gets burnt in the oven,” Clodagh explained.

4. Sift the flour, salt and spices into a large mixing bowl – Clodagh suggested lifting the sieve high to give the flour a good airing.

5. In another large bowl, whisk together the butter and sugar with an electric whisk until the mixture is light and fluffy. Beat the eggs in a separate bowl and add them to the creamed mixture a tablespoonful at a time. Keep the whisk running until all the eggs are incorporated; Clodagh says if you add the eggs slowly it is less likely that the mixture will curdle.

6. Fold the dry ingredients into the mixture, do not beat the mixture, as you want to keep the air in. Fold in the fruit, peel, chopped almonds, treacle and the grated lemon and orange zests.

7. Use a large spoon or spatula to transfer the mixture into the cake tin, spreading it out evenly with the back of the spoon. If you don’t intend to ice the cake lightly drop the whole blanched almonds in circles or squares over the cake.

Cover the top of the cake with a double square of baking parchment with a 25mm hole in the centre to give extra protection during the long, slow cooking. Bake the cake on the lowest shelf of the oven for four hours. It can sometimes take up to 30–45 minutes longer than this, but in any case, don’t look until at least four hours have passed.

8. Leave the cake to cool in the tin for 30 minutes, then transfer it to a wire rack to finish cooling. When the cake is completely cold ‘feed’ it by making small holes in the top and base of the cake with a cocktail stick or small skewer and spoon over a few teaspoons of brandy.

Wrap the cake in a double layer of baking parchment secured with an elastic band and either wrap it in kitchen foil or store it in an airtight container. If you wish, you can feed it at intervals until you need to ice or eat it.