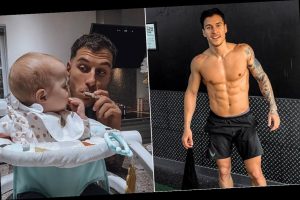 Gorka Marquez is known for his impressive dancing abilities on Strictly Come Dancing, where he met his partner Gemma Atkinson back in 2017. But the 28-year-old now revealed his ambitions to star on several other TV shows in a bid to expand his cooking skills! As part of a Q&A on his Instagram Stories, Gorka was asked whether he would like to do Masterchef or Celebrity Bake Off, and he replied: “Yeah I love baking and cooking.”

Since the coronavirus lockdown has seen Gorka spending more time than ever at home with Gemma and their daughter Mia, he has been taking the time to hone his culinary skills – and his coffee cake looked incredible! If he was to appear on a cooking show in the future, Gemma would likely be cheering him on as she recently admitted in an interview with HELLO!: “We both share the cooking but he’s a better cook I’d say.” Keep scrolling to see what he whips up in the kitchen at home…

What does Gorka Marquez eat for breakfast?

Both Gorka and his partner Gemma enjoy eating oats for breakfast

During his recent Q&A, one of Gorka’s followers enquired about his daily meals, and his response revealed that he enjoys a balanced diet packed with plenty of healthy foods to help fuel his home workouts. To start the day, the father-of-one said he likes to eat porridge and scrambled eggs – though not together, we hope! “Oats are one of my favourite things to eat. Nutritious and quick and easy to make which is great for my busy schedule,” he confessed on Instagram. This is normally followed by a morning snack such as “toast or bagel with peanut butter and banana.”

What does Gorka Marquez eat for lunch?

Gorka often snacks on smoothies throughout the day

Lunch tends to be a mixture of carbohydrates and protein, with his go-to meal consisting of either rice or pasta with chicken and vegetables. Perfect for refuelling his energy after one of his gruelling workouts at his home gym!

PHOTOS: Meet the future generation of Strictly Come Dancing! The pros and their children

To keep him going before dinner, the professional dancer steers away from unhealthy, fast snacks such as chocolate and crisps in favour of healthier alternatives, such as fruit-packed smoothies. Gemma told HELLO! her favourite smoothie recipe contains whey protein, coconut milk, almonds, frozen spinach, frozen broccoli and frozen cauliflower. Even baby Mia has been pictured sipping on a similar green juice, so perhaps the whole family enjoy the same mid-afternoon snack.

What does Gorka Marquez eat for dinner?

While Gemma is vegetarian, Gorka still enjoys cooking and eating meat. In the evening, he revealed he likes to cook rice or sweet potato with chicken or fish and vegetables. Gemma’s delicious vegetable dishes also regularly feature on their home menu, with the former Hollyoaks star admitting that Gorka loves some of her dishes. “I do a lot of vegetable soups and green soups which he loves with some bread and garlic oil,” she said. And we’re not surprised to hear that one of Gorka’s specialities is a Spanish omelette – we bet he’s mastered the art of the simple yet delicious potato and egg dish!

According to Gorka, his evening snack is a smoothie bowl or porridge, but his fans also know he’s no stranger to baking a delicious cake, too. After cooking a homemade pasta and ragu dinner, Gorka recently treated himself and Gemma to a creamy coffee and walnut cake. We wouldn’t mind a slice or two, either…