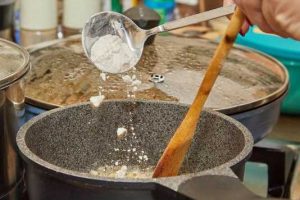 Hugh Fearnley jokes about cutting his finger off whilst cooking

Making the perfect sauce to accompany your home cooking can be hard to master – especially when it comes to adjusting the texture. Flour may be the go-to ingredient for thickening up liquids, but using too much of it can leave unpleasant lumps. A cooking expert has shared their no-waste alternative to flour for thickening loose sauces, soups and more.

Flour is not only difficult to work with while cooking a sauce from scratch, but also contains gluten which is a common allergen.

While it may seem odd to use anything other than a powdery ingredient to thicken sauces, an expert at DabbaDrop, the zero-waste takeaway service, explained that potato water is a great alternative.

Speaking to Express.co.uk, they said: “Using leftover potato peels, boil them in water for 10 minutes, compost the peels after and save the potato water in a container for when you need it.”

The texture of this liquid is similar to milk or water when mixed with flour, and is ideal for everything from gravy to homemade soup.

According to Cookist, the effects of starchy water on your ingredients are more long-lasting than flour too.

They said: “As potato cools down, it becomes thicker, which makes it a healthy option for when you’re seeking to thicken soups and sauces.

“If applied this way, the soup or sauce will have a creamy and rich consistency.”

How to use potato water

Boiled potato water also creates a good base for a basic gravy without having to add any thickeners.

Simply pour the hot water into a pan and add broth from whatever meat you’re cooking.

Add in your seasoning and stir on medium heat until the ingredients are combined.

The gravy should be creamy and thick without having to use gluten – a common allergen found in flour.

Making gluten-free bread is also easy to do by switching out the flour for a cup of potato water.

Not only does it create a nice texture, but it is also an inexpensive alternative to buying gluten-free grains which cost considerably more.

According to cooking experts, it is best to leave potato water to cool before using it in baked goods.

Unlike flour which has a bland taste, the watery residue left after boiling potato peels can improve the flavour of your home cooking.

The team at DabbaDrop explained that it “adds a wonderful earthy flavour”, perfect for savoury sauces.

The benefits of switching to this no-waste hack don’t stop there. In fact, potato water has several uses outside of cooking.

Dabbadrop said: “Potato water contains minerals such as magnesium, iron, and phosphorus. Not only do these benefit the human body, they’re also great for plants.”