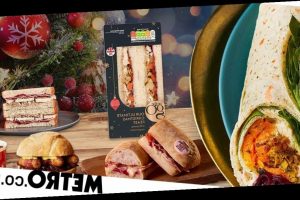 For Brits, the Christmas countdown usually starts the minute the sun goes down on summer.

We may be in lockdown, but Christmas isn’t cancelled, and the question of ‘is it too early to buy a Christmas sandwich for my lunch’ is being whispered all over the country.

The answer: it’s never too early.

‘Tis the season after all.

Here’s where you can get your taste of Christmas…

After reportedly selling a record number of sandwiches in the lead up to Christmas last year, Aldi has launched its new festive food-to-go range.

With six sandwiches and wraps, including the new Plant Menu Vegan Feast Sandwich, the Specially Selected Turkey with Pigs Under Blankets, and the traditional Turkey Feast, there’s something for everyone. Prices start from £1.69.

Best known for its limited edition festive drinks range (did someone say gingerbread latte?), Costa has launched its Christmas menu, which includes a vegan option for the first time, the meat-free Turkee, Cranberry & Stuffing Bloomer Toastie.

The rest of the range is a spin on classics, including the Lobster Toastie, made with responsibly sourced lobster, the Brie, Maple Bacon and Cranberry Panini, and the British Turkey & The Trimmings Toastie. Customers can get a sandwich and drink as part of the meal deal for £5.

Morrisons has launched eight Christmas sandwiches for those looking for a festive bite. It includes the new Turkey Deli Brioche Roll, the Turkey Christmas Lunch Sandwich and the Pigs Under Blankets Sandwich.

There’s also a vegan option, the Vegan Festive Feast sandwich, filled with meat free turkey style pieces. Prices range from £2.40 to £2.75 or as part of the £3 meal deal.

Having just announced that it will keep 400 stores open until midnight in Christmas week, M&S is sure to see many of its customers grabbing a bite from its seasonal range as they stock up on gifts and food.

The Christmas range sees the return of festive favourites, as well as additions like the Truffle Egg & Honey Roast Ham sandwich. The festive food-on-the-move range also includes the Turkey Feast Sandwich and the Turkey Curry Wrap. Prices start from £3.30.

Sainsbury’s has released its Christmas selection for its On The Go range, said to have a ‘symphony of flavours’.

If that isn’t enough, there’s also the vegan Christmas New Yorker Inspired sandwich, the Turkey with Pigs Under Blankets, and a festive Falafel and Houmous Wrap. Prices start from £2.

Said to be inspired by the classic turkey curry made around the festive season, Tesco has released its list of the ten Christmas sandwiches lining its shelves, including a turkey curry and onion bhaji wrap.

The range also includes the pigs under blankets sub roll, a turkey and trimmings wrap and sub, a root veg and chestnut wrap, and more. Prices start from £2.50 and most of the sandwiches can also be bought as part of the meal deal.

MORE : You could win a limited edition McDonald’s Christmas jumper

MORE : Greggs confirms there are no plans for a vegan festive bake just yet