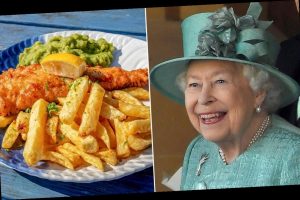 Great Britain is known for its traditional meal of fish and chips – tender cod in batter, chunky chips soaked in salt and vinegar and that English classic, mushy peas… you really can’t beat it.

Now the Queen‘s former royal chef has revealed that Her Majesty enjoys the popular meal just like us! Darren McGrady posted two new videos on his YouTube channel showing how to cook the monarch’s fish and chips recipe, exactly as she likes it.

Darren revealed how fish and chips were on the menu at Buckingham Palace every Friday – just as it is in many households across the UK. “Even the chefs looked forward to Fish and Chips Friday,’ he says.

MORE: The Queen’s daily diet revealed: what the monarch eats for breakfast, lunch, tea and dinner

He said: “The Queen wouldn’t really eat the fish fried in all that crispy rich batter – a little bit too much for her. She preferred a more refined fish and chips. The chips were all cut the same length – every one the same length, perfect rectangles.”

In the first video, we see Darren peel Maris Piper potatoes (he says they make the best chips), then place them in a saucepan of water which prevents them from sticking together in the oil when frying – top tip.

“When making the fish, we’d actually do a Panko crusting,” Darren says. “We’d take the fish (cod) and season with some salt and pepper. It would go into flour and then a mixture of egg yolk and melted butter. The egg yolk helped bind the Panko crumbs to the fish and the butter helped fry the fish as it cooked in the oven.”

Darren then puts the fish into a 200C oven for 10 minutes until it’s nice and crispy. The chips go into a hot fryer for four to five minutes, before being drained and sprinkled with some salt while still hot.

We absolutely love how Darren presents the Queen’s chips on the plate. He says: “Then we add the chips, but these are special chips so we have to build a little tower.” A tower of perfect rectangular chips!

To finish, the chef spoons his own tarragon hollandaise sauce – containing egg yolks, lemon juice, tarragon, salt, pepper and clarified butter – around the fish and chips and tops it off with a pretty flower.

“Does the queen eat fish and chips?” asks Darren. “Sort of I guess. I love the combination of flavours in this dish and we’d serve this a lot when the Queen had guests for lunch.”

We are so trying this fancy fish supper.