The real reason you should avoid Wendy’s baked potatoes 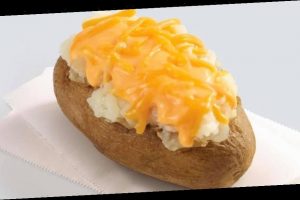 After a long day, is there anything as comforting as a steaming hot baked potato? You can feel your troubles melt the moment that pat of salted butter begins melting into a sea of fluffy white starch. The problem, though, is that it takes a good hour to bake a potato in your oven (wrapped in foil or not), which doesn’t even include time for preheating. And sure, microwaving is an option, but let’s admit it — it’s just not the same as an oven-fresh spud.

A super-convenient solution would seem to be tater takeout from Wendy’s. For less time than it might take to nuke a potato in your own kitchen, you can swing by the drive-thru and get this small meal or side dish served plain, topped with sour cream or cheese — or even bacon or chili. Originally introduced in the 80s, when baked potatoes were part of the low-fat/high-carb trend sweeping the world, Wendy’s baked potatoes are hugely popular, with about one million sold each week (per Fox News).

But be warned: you shouldn’t order a baked potato at Wendy’s. That’s because employees of this fast food chain admit that they don’t always prepare potatoes the way the menu describes.

The biggest revelation on Reddit about Wendy’s baked potatoes is that, sometimes, employees nuke the potatoes instead of baking them. “If you come during/at the end of a lunch or dinner rush and you order a baked potato, there’s a decent chance you’re getting a microwaved potato,” one user confessed. This claim is at odds with the official company word on the matter. “We cook them from a raw state, in an oven, wrapped in foil, baked for an hour, just like you would at home,” Lori Estrada, Wendy’s VP of culinary innovation, told Thrillist.

Jereme Allison, who says he worked at Wendy’s, agreed that this was usually the plan, but noted, “There were a few times .. we did use the microwave to rush some potatoes — this may have been because we were running low or suddenly received a larger than expected rush on potatoes, but we always tried to keep to oven-baked potatoes for our customers,” he wrote on Quora.

Even when the spud’s perfectly baked, otherwise ill-prepared potatoes have been the source of customer rage on Twitter. “@Wendys your clap backs to your competition are great, but your Baked Potatoes … not so much. Got back to the office and barely a sprinkle of chili. #Disappointed,” tweeted one customer with a picture of a potato that sported only a few lonely beans. Other Twitter complaints mention rotten potatoes, small potatoes and a photo of a potato that looks … pre-eaten?