The science behind why some people love pickles so much 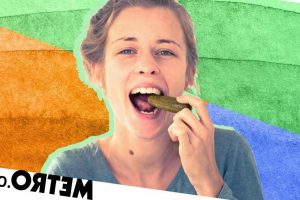 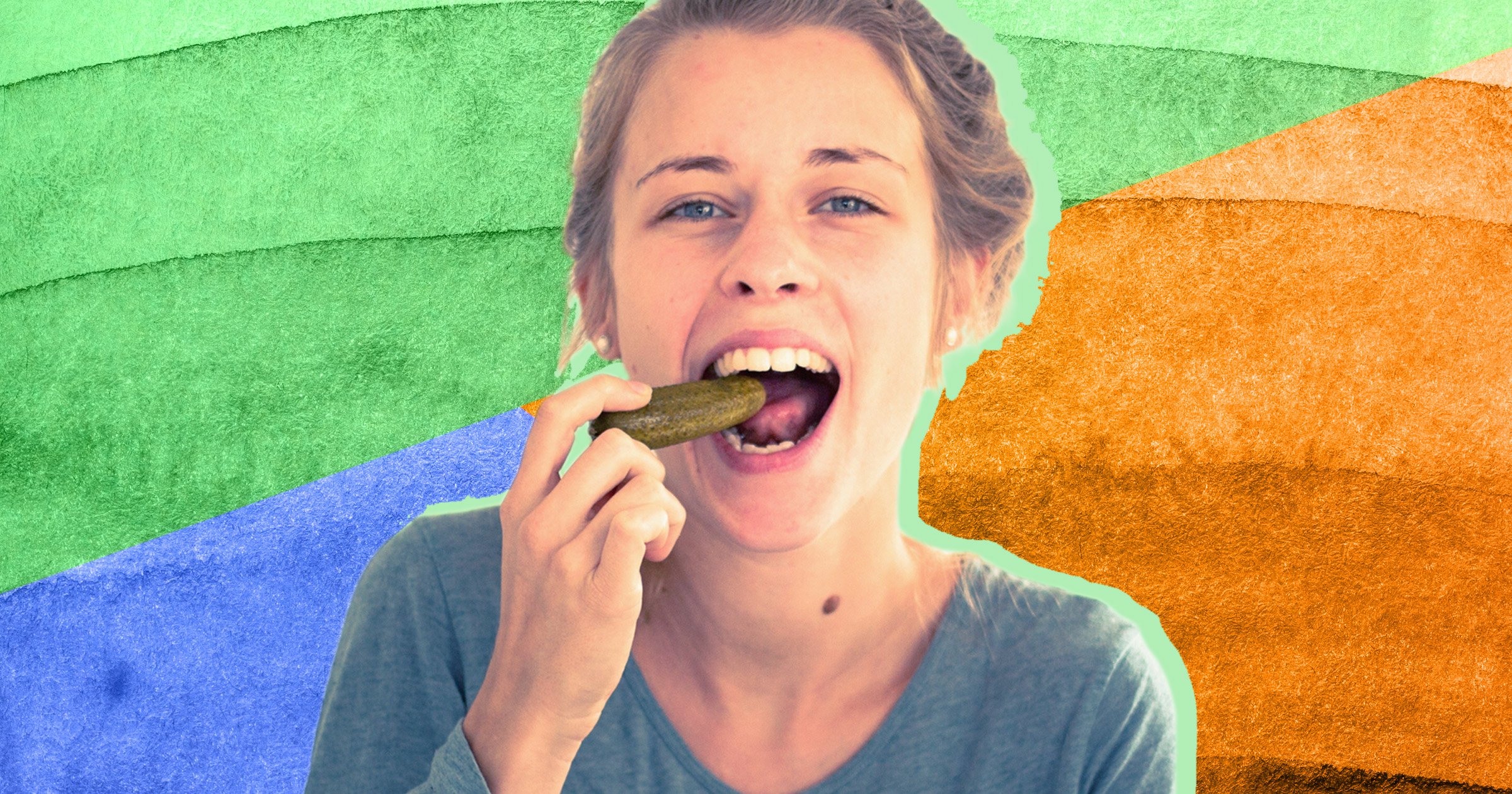 From the more mainstream (pickled onions and gherkins), to the less universal (pickled eggs and mussels in a jar), I can’t get enough of pickles.

In fact, a few years ago, I even attempted to break the Guinness World Record for ‘most pickled eggs eaten in a minute’.

I wasn’t successful, but at least I got to eat a load of pickled eggs.

It’s not just me that is a fan of the salty, crunchy, tangy, goodness.

Pickles have had a resurgence in recent years, with pickle-back shots (bourbon followed by a chaser of pickle juice, to neutralize the burn) and deep fried gherkins appearing on menus up and down the country.

That said – pickles can be divisive and their fermented, vinegar vibes aren’t as universally loved a taste as things like chocolate, crisps, or even fruit.

I have friends who almost retch at the thought of eating a pickled mussel, and even turn their nose up to the harmless pickled onion.

To them, the taste is gross.

So, what is it that makes us taste things differently? Why do some of us love pickles? Are they good for us?

And what is it about them that can be addictive?

A preference for pickles begins before we’re even born

‘There are multiple factors that determine an adult’s taste preferences, and it begins with early life in the womb,’ explains Nicola Gunn, a nutritionist at Gloji.

In fact, studies have shown that some flavours such as anise, carrot, or garlic are present in amniotic fluid, which the baby will then ingest.

‘This results in an increased preference for these flavours in infancy and early childhood,’ Nicola continues.

‘The same principle applies in breastfeeding mothers too, as some flavours in mum’s diet affect the taste of breast milk.’

Once out of the womb, as children, we are biologically inclined to prefer sweet/salty flavours and reject bitter/sour flavours.

‘Our level of exposure to one or the other throughout childhood then contributes to how accepting we are of different flavours in our adult life,’ says Nicola.

Genetics also have an input in our taste preferences.

‘We have different types of taste receptors on the papillae of the tongue that will detect bitter, sweet, umami salt and sour flavours,’ Nicola explains.

And the quantity of papillae we have can be determined by our genetics.

‘TAS2R38 is the most studied gene related to taste receptors,’ she says

People who carry this gene are often described as ‘super tasters’. The super taster gene determines how sensitive we are to bitter flavours.

‘Therefore, those without the super taster gene will be more likely to tolerate bitter flavours found in dark chocolate, sprouts and unsweetened coffee,’ adds Nicola.

It would also suggest that they would be more likely to enjoy pickled flavours.

‘Around 25% of the population are thought to be super tasters – and they’re more likely to be women than men.

‘There is also discussion about whether taste sensitivity, as a result of this gene, also affects the amount of salt we like in our food.’

So, our environment and genetics both play a part in why we like, or dislike, foods fermented in brine, or pickled in vinegar.

Are pickles good for you?

Traditionally, pickled foods are fermented vegetables, which are brined using salt and water, and left at room temperature for a week.

According to Nicola, foods that undergo this method of pickling are considered a good source of probiotics due to the bacteria present following the process.

However, the commercially produced supermarket varieties generally use vinegar to pickle vegetables.

These don’t have the beneficial probiotic bacteria of food that’s been fermented, for example, sauerkraut.

The supermarket varieties – such as onions or cabbage – will have less of a probiotic benefit, as the vegetable itself has not undergone fermentation.

They also, sadly, don’t count as one of your five a day.

‘However, a recent study has shown that pickle juice could lower blood sugar spikes in healthy adults,’ saysMairead Molloy, a food disorder specialist, tells us.

In addition, pickle juice has a variety of antioxidants, including vitamin C and E.

Can pickles help with anxiety?

There is also some evidence suggests that pickles might be a taste worth acquiring if you suffer from anxiety, Mairead tells us.

‘The good bacteria may increase levels of a chemical in the brain called GABA, which controls anxiety,’ she says.

Therefore, this would have a similar effect to the work that anti-anxiety medication does – although on a much lesser level.

Can pickles help with muscle cramps?

Athletes have been known to drink pickle juice as a treatment for muscle cramps, as the sodium that we find in pickles can be useful.

According to Gemma Mason at Gloji, athletes would be advised by clinicians to ingest 70-200ml of pickle juice, around 30-60 minutes before exercise, alongside volumes of water.

This has been shown to help prevent cramping.

The negatives of pickles

Similar to sugar, salt can be addictive.

‘The reasons why some people may crave salt – like pickles – can vary but, like sugar, salt can be addictive,’ Dr Bunmi Aboaba, The Food Addiction Coach, tells us.

‘Researchers have found the brain pathway responsible for the craving, a specific circuit, which is part of the brain’s opioid system, can also make you want salt.

‘Also, you can build a tolerance to salty foods, therefore  you need more of them to activate the reward centre of the brain.’

The amount of sodium in pickles can be a problem for people who suffer or are at risk from suffering from high blood pressure, heart disease, kidney disease and stomach cancer, Gemma says.

Another disadvantage for some individuals, is that pickled foods can cause bloating due to water retention from the high sodium content.

‘If it is something that you enjoy cut back on the portion sizes and monitor your intake,’ adds Gemma.

What does craving pickles mean?

When we do crave them – which we often can – it’s usually because of the salt content. And, as Anna Mapson, Registered Nutritional Therapist mBANT CNHC, points out, if you are craving a salty snack, pickles would be better than the more common choice of of crisps, due to the fibre content.

We also have to factor in the texture of pickles, says Dr Bunmi.

‘When people crave certain foods it is also the texture that plays an important role,’ she says. ‘They are crisp and crunchy as well as salty.’

A pickle craving may also be a sign of dehydration and also the person’s electrolytes are out of whack. Because it is high in salt, this plays a major factor in pickled products’ addictive nature .

It could also indicate a sign of low blood pressure.

‘Pickle juice is also popular with those following a ketogenic diet as they may need more sodium to manage electrolyte balance,’ says Shona Wilkinson, aka DR VEGAN. She adds:

‘They can also be a way of boosting your intake of antioxidants.

‘The natural antioxidants found in all fruits and vegetables help in the fight against free radicals – the unstable chemicals that form naturally in the body and are linked to various health problems.’