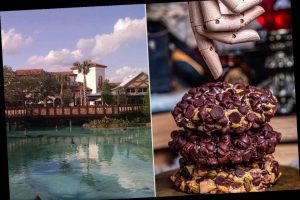 Gideon's Bakehouse, an Orlando bakery known for its massive cookies, is opening up its second location at the most magical place on earth.

Walt Disney World officials announced Wednesday that the bakery would be opening up its much anticipated second location at Disney Springs later this year. After opening at the East End Market in 2016 with only one employee and an $800 budget, Gideon's Bakehouse quickly became world-renowned thanks to its almost half-pound, handmade cookies.

The cookies had previously been available at Polite Pig, a barbecue restaurant in Disney Springs, but now they will have a store all to themselves.

"To go from a 286- square-foot bakery to the international stage that Disney draws is a remarkable experience," says Steve Lewis, owner and founder of Gideon's Bakehouse. "We're doing this on our own steam, free from partners or investors. That has been made possible by the unwavering support of our local community."

Gideon's Bakehouse has won numerous awards in recent years including Best Place in the World to get a Cookie 2020 by The Boston Globe, Best Bakery Award by Orlando Magazine, and Top 10 Best Cookies in the U.S. by Sports Illustrated to name a few.

The bakery plans on expanding its menu from just cookies and cake slices to include a unique selection of iced coffees like Original Peanut Butter Iced Coffee. Gideon's will also introduce a daily "Hot Cookie Hour" in the evenings. "There are more than a few secrets we have up our sleeves, but you'll have to wait and see," says Lewis.

Gideon's Bakehouse is opening in late 2020 and will be located at The Landing in Disney Springs across from Jock Lindsay's Hangar Bar.

Disney Springs is the main shopping and dining hub at Walt Disney World. It began a phased reopening in early May following closure due to the coronavirus pandemic. The resort's theme parks will begin reopening to the public on July 11.