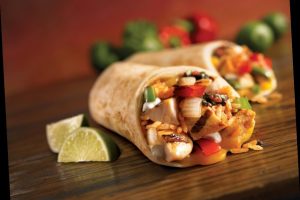 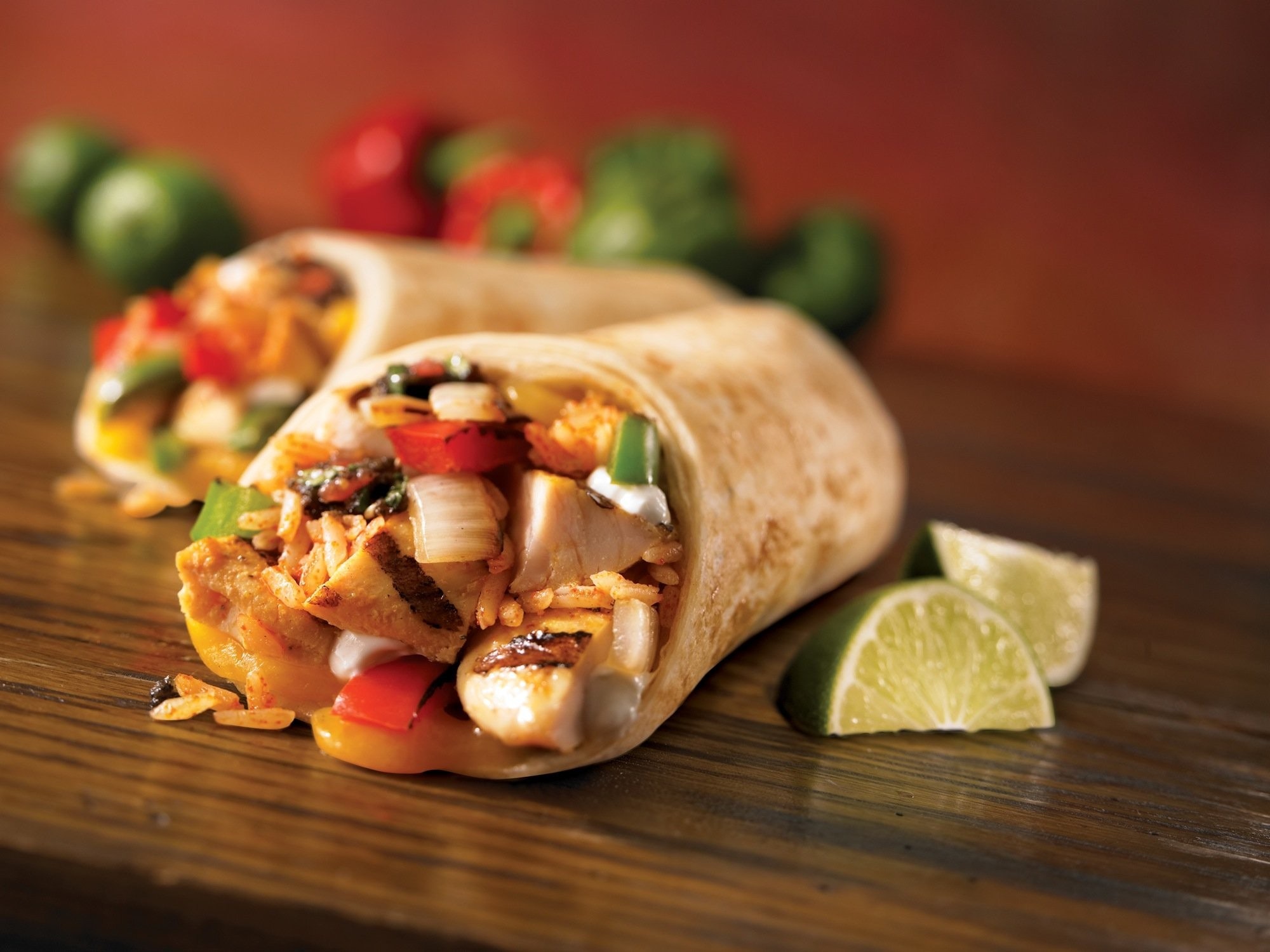 Get ready to chow down on a mouth-watering burrito (and save a little money), because National Burrito Day is on Thursday, April 1. The national holiday makes it possible to score deep discounts on your favorite bites from go-to spots. With offers like $5 burritos, free burritos, and BOGO deals, you’ll want to mark your calendar for these National Burrito Day 2021 deals before they’re gone.

It’s unclear how long National Burrito Day has been around, but the burrito has been around for quite a while. According to National Today, burritos began popping up in American restaurants in the 1930s. Before that, the oldest known mention of "burrito" was in 1895, and according to the Diccionario de Mexicanismos, it translates from English to Spanish as "little donkey." When it comes to what make a burrito, traditional burritos have very few ingredients. So, if you’re used to the overstuffed, ingredient-heavy bites like Chipotle’s offerings, you’re a fan of Mission Burritos, which were invented in San Francisco in the 1960s, according to Vox.

Now that you have a little history lesson under your belt, you can check out all the burrito offers you can handle on Thursday, April 1.

West Coast chain Tocaya Organica is offering a $2 off all burritos on April 1 for dine-in, pickup, or delivery. To get the discount, use the code "BURRITODAY" in Tocaya’s iOS app, the chain’s Android app, on the website, or through Postmates or UberEats. If you order in-store, make sure to mention the code before checking out to get the deal.

Moe’s Southwest Grill is offering a $5 deal on April 1, and the discount includes any of its burritos and bowls. To get the deal, you can order in-store or get delivery through the Moe Rewards app. If you’re grabbing the deal through delivery, you’ll need to sign up for Moe Rewards, and redeem the promotion in the app. When you join, you’ll score a free cup of queso as a welcome offer and a free burrito on your birthday.

The chain is partnering up with the founder and CEO of Coil, Stefan Thomas, to launch a game called “Burritos or Bitcoin.” From 9 a.m. PT through 6 p.m. PT on April 1, you can play the game by heading to burritosorbitcoin.com. To play, you’ll need to guess the correct six-digit passcode for a chance to win a free burrito or up to $25,000 in Bitcoin. You’ll have 10 tries, but if you don’t guess the right passcode, you’ll still get a special offer from Chipotle.

If you’re one of the lucky 10,000 people to score a free burrito, you’ll receive an email notification after the end of the promotion. The free burrito will come as an offer code that you can redeem online or in the Chipotle app.

If you’re one of 50 fans to score $500 in Bitcoin or the three lucky people to win $25,000 in Bitcoin, you’ll receive an email notification and instructions on how to redeem your Bitcoin.

On April 1, customers can redeem a buy one, get one free offer for Epic Burritos in the Del Taco app. The chain’s Epic lineup of burritos includes the Epic Loaded Queso Burrito, the Epic Original Mex Burrito, and its new Epic Honey Chipotle BBQ Crispy Chicken & Bacon Burrito. To get in on the BOGO action, you’ll need to download the Del Taco iOS app for free or the Android app from Google Play and redeem the offer at checkout. 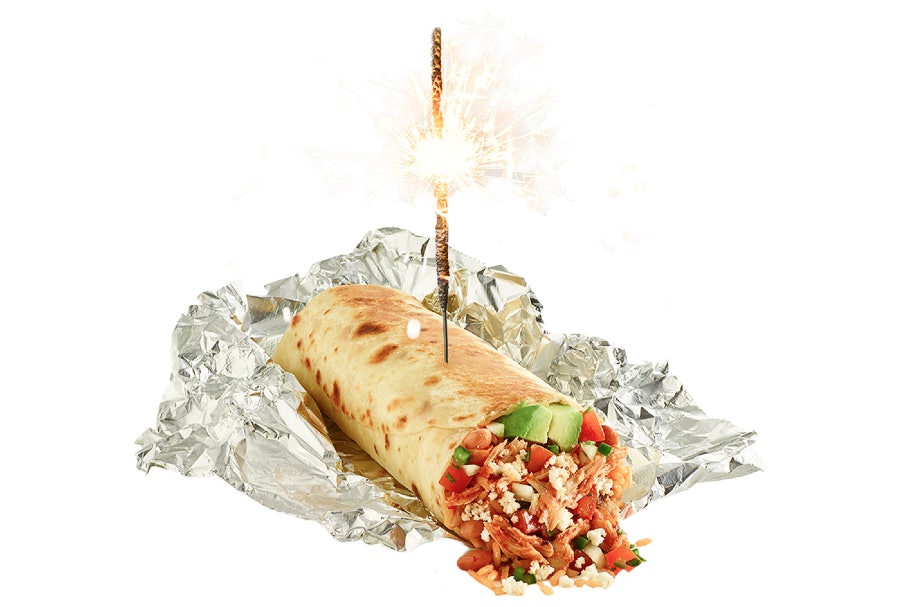 El Pollo Loco is serving up a BOGO burrito deal that you can score by heading to elpolloloco.com/burritoday. There, you’ll get a BOGO coupon redeemable in-store or through the El Pollo Loco app. The coupon is good for one free burrito when you buy one fire-grilled chicken burrito.

If that wasn’t enough, Loco Rewards members can score a second free burrito redeemable through the end of April. To get double the BOGO, download the free El Pollo Loco app and join Loco Rewards before grabbing your National Burrito Day bites. If you sign up for rewards, you’ll receive the second free burrito offer in your account on Friday, April 2.

Texas-based chain Abuelo’s is giving customers 50% off Durango Burritos through the Abuelo’s app, online Abuelo’s orders, and in-store. The promo code will appear at the top of the app on April 1. You can enter the code at checkout for pay-ahead orders or present the discount for in-store orders. Pricing varies by location, but the Durango typically sells for around $13.79, so you can score the bite for $6.90.

Rubio’s Coastal Grill is serving up a $2 off burritos deal that’s redeemable on Wednesday, March 31, or Thursday, April 1. You can get the coupon online from Rubio’s coupon page and redeem the offer in-store. While you can’t score the offer through third-party delivery orders, you can redeem it online for pickup and delivery through Rubio’s website. The coupon is also good for multiple burritos, meaning you can get $2 off of each one in your order.

Taco Bell is offering a BOGO Chalupa Cravings Box when you order from Uber Eats Thursday, April 1 through Monday, April 5. The Chalupa Cravings box features a Mountain Dew Baja Blast, a Chalupa Supreme, a Beefy Five-Layer Burrito, and an order of Chips and Nacho Cheese Sauce. You can also score a bonus deal if you sign up for Taco Bell Rewards and download the app: a free Doritos Locos Taco redeemable through the app.

With so many bites to choose from, the only struggle will be choosing which deal to grab. When heading out to get your National Burrito Day bites, make sure to check the CDC’s latest guidance on social distancing and masking.