This Is The Trick Your Instant Pot Pho Has Been Missing 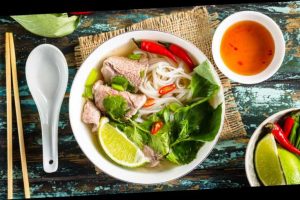 When it comes to hearty comfort food, there’s nothing more delicious — or cozier — than a hot bowl of pho, the Vietnamese noodle soup dish that consists of beef-bone broth, rice noodles, meat, and plenty of fresh herbs. Unfortunately, though, making pho can be a pretty arduous and time-consuming affair, as cooking the perfect broth (a very important part of the dish) typically involves simmering beef bones for anywhere from around three hours to upwards of 12 hours (yes, 12!), according to LovingPho.com.

That is, of course, where your Instant Pot comes in. Thanks to this handy kitchen appliance, you can recreate this flavorful dish in a drastically shorter amount of time — and while the results won’t exactly be as magical as if you did devote an entire day to cooking the broth, it’s a pretty good shortcut method for a tasty-yet-easy homemade version of pho, as Delish points out.

Luckily, if you’re already whipping out your Instant Pot to cook up this delicious dish at home, here are some simple-but-genius tricks to make the perfect pho.

Charring your vegetables gives your pho some extra flavor

A typical pho recipe calls for vegetables like onion and ginger, and, while you can certainly just throw those ingredients into your Instant Pot as is, Delish recommends charring them beforehand to ensure the broth has a tasty, smoky flavor. You can achieve this by placing your halved onion and unpeeled ginger over a medium-high flame on your stove until the skins are blackened (about three to four minutes). Or, you can even use the “sauté” setting on your Instant Pot, as Epicurious recommends. Simply preheat your Instant Pot by choosing “sauté” on high heat, add the onions and ginger, then cook until charred!

Beyond this genius tip, Delish‘s other secrets to making the perfect Instant Pot pho include boiling the beef bones for ten minutes before cooking, which will help ensure a clearer broth. And if you want to go even further to obtain an extra-clear broth, let your broth cool in the fridge for four hours before skimming off the layer of fat sitting on top.

But, the broth isn’t the only important part of this dish, of course — there’s also the delicious, tender meat that you’ll be topping the pho with! To get your beef as thinly sliced as possible, a good trick is to place the meat in the freezer for 15 to 20 minutes, which Delish explains will help the meat firm up so you can easily cut it into thin slices. Genius!