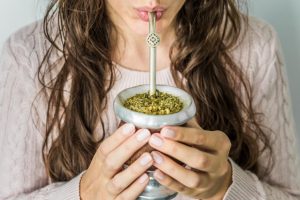 If you’ve been looking for an alternative to your latte that doesn’t sacrifice the caffeine boost, you may have come across yerba mate tea. Originally from South America, yerba mate can be found in health food stores and even on the shelves of more conventional grocery stores (via Mayo Clinic). Proponents of yerba mate say it has a variety of health benefits, but some studies have shown a possible link between drinking hot yerba mate and an increased risk of certain cancers.

Yerba mate is an herbal tea made from the Ilex paraguariensis tree (via L.A. Times). Its leaves and twigs are brewed at high temperatures, although it can be served both hot and cold (via Healthline). While there is not much scientific evidence to support the claims that yerba mate has wide-ranging health benefits, it does contain a number of antioxidants and anti-inflammatory compounds that have been shown to have protective properties. Yerba mate also contains caffeine which is a stimulant that has energy-boosting effects. There are anecdotal stories that the caffeine in yerba mate does not cause the same jittery feeling that caffeine in coffee drinks does. No scientific studies have been able to prove this, however.

Do the health risks of yerba mate outweigh the benefits?

What scientists have been interested in is the possibility that yerba mate puts consumers at an increased risk for oral and oral-pharyngeal cancers — basically cancers of the mouth and throat. In Latin America, where yerba mate is consumed in large quantities, there is an increased percentage of these types of cancers than would normally occur in a population (via Oral Oncology). While the data from several studies indicate that yerba mate users are at higher risk for oral and oral-pharyngeal cancers, scientists have not been able to determine if the increase in cancer is being caused by the tea itself or by the high temperatures at which the tea is consumed.

Yerba mate contains chemicals called polycyclic aromatic hydrocarbons (PAHs), which are known carcinogens. It’s also possible that the high temperatures at which people drink yerba mate may be damaging the lining of their mouths and throats, but more studies need to be done to find out if this is linked to cancer (via The Pan American Journal of Public Health). If you enjoy drinking yerba mate, it might be best to do it in moderation until more studies are done about its safety.