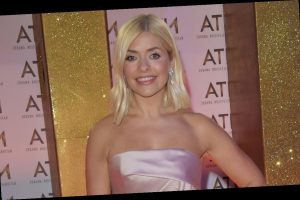 Holly Willoughby‘s diet and her favourite foods have long been a topic discussed by her fans. The TV star often gets involved in the cookery segments on This Morning, which she co-hosts with Phillip Schofield. In fact, she recently revealed that she’s been baking chef Phil Vickery’s homemade bread in lockdown with her three children – but are there any foods Holly really doesn’t like and what’s the one food she will avoid at all costs? Read on to find out what it is…

Back in June 2019, Holly and Phil were joined by world-renowned chef Angela Hartnett on This Morning. As they watched her cook a gorgeous summer pasta dish, the chef admitted that she cheats the rules when it comes to pasta, but there’s one dish she’ll always stick to tradition with – and that’s pizza. She said: “You know what, I’m authentic about pizza. I don’t believe in pineapple on pizza, I think it’s wrong…” And Holly agreed, replying: “I think it’s wrong … I think any fruit on pizza is weird. Any fruit in any sort of cooking I don’t like, apart from like, an apple tart.”

MORE: Naomi Campbell’s personal chef reveals her extraordinary food diet of only one meal per day

Holly does not agree with pineapple on pizza

When Angela asked if she’d ever eaten ham and pineapple together, Holly replied vehemently: “NO! I don’t get that.” Phillip belonged in the other camp, saying he was a fan of pineapple on pizza. “I’d do it,” he said. “I’m not sure I’d order it, but it’s a Hawaiian pizza.”

Angela warned that she could fall out with him over the debate and admitted she once fell out with a boy on a date because he wanted pineapple on his pizza. “I knew there and then that this relationship wouldn’t go anywhere,” she revealed. Phil commented directly to the camera: “That’s harsh!”

MORE: Lisa Faulkner’s summer ‘fantasy cake’ is the most delicious back to school treat

Holly is a self-confessed foodie, and in the segment told Angela that she just can’t master the Yorkshire pudding. However, it would appear that she does have some skills in the kitchen, once telling Asda Good Living magazine that her go-to weekday dinner would be: “Carbonara. Just mix pasta, egg yolk, Parmesan, pepper and ham – done!”