TikTokker horrifies everyone by cooking steak in the toaster 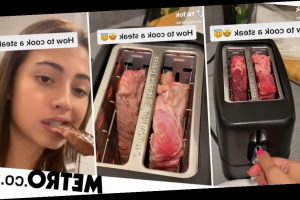 We’ve learned some pretty cool tricks on TikTok, but every once in a while we see something that shakes us to our core.

Remember the American mum who made a horrendous cup of tea?

Now we’ve come across something that has again left us shook.

University of Southern California student Juliette, who describes herself as a chef, has cooked two pieces of steak in a toaster.

After sharing the video on TikTok, Juliette was inundated with comments about the meal being ‘uncooked’ and ‘disgusting’.

In the video, she can be seen putting the two steak slices into a toaster before getting them out and slathering sauce over the meat.

She takes a bite of the medium-rare steaks, showing us that they’re cooked.

We spoke to Juliette, who told us that the steaks were perfectly cooked when she ate them.

And though people might rush to think she only left the steaks in the toaster in the same setting as she would a piece of toast, they would be wrong.

She tells Metro.co.uk: ‘I was cooking a waffle in my toaster and thought about how interesting it would be to cook another food item in there.

‘I had two pieces of steak in my freezer and knew they would fit perfectly.

‘It took about 20 minutes to cook on the highest temperature.’

Juliette then tasted the finished product, saying how much she enjoyed it.

She added: ‘The steak was amazing! I’m not just saying that to prove everybody wrong, but it actually cooked the steak perfectly.

‘I ate half of the steak and gave the other half to my roommate who enjoyed it aswell.

‘I’m also a huge fan of steak sauce. Drenching my steak in sauce is a must. I’ve done it since I was a child.’

Though Juliette enjoyed the meal, others were not as keen on the concept.

On the video, which has been watched by 1.6 million people, one person commented: ‘I just watched a crime happen’.

Another wrote: ‘Nice way to burn the outside and still get salmonella’.

In case you were wondering, though you can get salmonella from red meat, having your steak rare is safe as long as it is cooked to an internal temperature of 135°F. This ensures that heat is strong enough to kill the bacteria that can cause sickness.

Juliette isn’t fussed about all the comments and says her version is completely edible.

‘I hope my video inspires more people to cook in a toaster, forget the stove.’

MORE : Mum shares tip for checking eggs are safe to eat, even if they’re brand new

MORE : Woman shares how she bought a weekly food shop for two for just £16