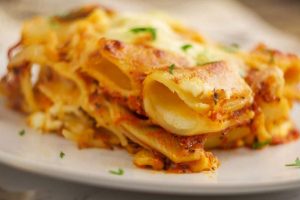 Users on the video-sharing app have been fascinated by the “honeycomb pasta” trend, which is essentially a new age lasagna or baked ziti, but with different noodles.

WHY TIKTOK USERS ARE GOING CRAZY FOR BAKED FETA PASTA

To make honeycomb pasta, home chefs cook rigatoni or another tube-shaped pasta and place each noodle in a round casserole pan vertically. Once the honeycomb look is achieved, the TikTok chefs put a cube of mozzarella cheese is inside each noodle before the dish is covered with alternating layers of sauce, cheese, veggies, herbs and meat (or meat substitute for vegan diets).

When complete, the honeycomb pasta is placed in an oven for a set amount of time.

Many TikTokers who have shared videos of their honeycomb pasta attempts have made sure to dramatically flip their pan upside for the camera as they try to free their tightly packed dish.

So far, the honeycomb pasta hashtag has dozens of videos linked to the term, which have amassed more than 1.4 million views on the app.

Other users have tagged the trend as “pasta cake,” a term that has attracted more than 1.8 million viewers.

FOOD HACKS: THE COOKING TRICKS AND CULINARY SHORTCUTS THAT WENT VIRAL IN 2020

While most TikTok users have expressed their support with likes, shares and positive comments, some aren’t as easily impressed.

Meanwhile, the TikToker with the most likes and views on their honeycomb pasta post is creator Kristen Beamer, who received more than 32,800 likes and 260,100 views thus far.

“Glad it was good in the end! I was thinking it BETTER be worth all that work,” one TikTok user wrote to Beamer.

“[I’m] so happy more people know about this recipe now,” they wrote.

According Google data, online searches for honeycomb pasta reached its peak between March 28 and April 3 of this year.