Twins who love hunting animals say it's brought them closer together 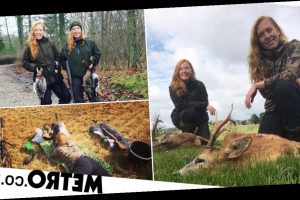 A pair of Danish twins who come from a family of hunters became interested in hunting in their early teens.

Veterinary nurse Rikke Jacobsen, 26, was fascinated with animal anatomy and enjoys seeing what organs her bullets go through.

Along with her twin sister Trine, a physiotherapist, she started hunting in her teens, learning the skill from their father.

The pair say their controversial pastime has bought them together.

Though they receive a mixture of comments online, some pretty negative, the twins say they ‘don’t care’.

They’ve gone out into the wilderness with their father and hunted various animals including foxes, boar, deer and pheasants.

Rikke says that her knowledge of an animal’s anatomy from working as a vet nurse has grown her passion for hunting.

The pair believe that being self-sufficient in cooking meat that they have hunted themselves is a ‘gratifying’ experience. They believe that they’re doing the world a favour.

They also have a hunting dog that helps them carry their game.

‘For me hunting is a lifestyle,’ says Rikke.

‘I live and breathe for nature, and to live and to provide myself through hunting and what nature can provide us with. It brings us closer to our ancestors.

‘Many people think it’s all about killing when they think about hunting. But there are so many preparations before, during and after the hunt.

‘Without wildlife in our world, we would have nothing. So every time we kill, we say “thank you” for the opportunity.’

When Rikke saw Trine hunt her first red deer in the Scottish Highlands, she felt much closer to her sister.

‘The glowing look on her face, when she saw that big animal fall was unforgettable,’ said Rikke.

‘Her smile stretched from ear to ear. Seeing that look made me realise how special these experiences really are and we get to experience it together.

‘The thought that we have this passion together is what I love, and it has brought us closer together with our father. To go home with meat you have hunted yourself, and to be so self-sustainable is really satisfying.’

The largest animal they have both hunted was a Royal Scottish red stag, which weighed approximately 15st 10Ib.

Trine got her hunting license after joining the military where she started handling guns and firearms.

She said: ‘Hunting allows me to get the chance to be a bigger part of nature, and it gives me the rush of adrenalin when the animal you have been waiting for finally comes along.

‘I want to fill my freezer with high-quality game meat, rather than store-bought meat. The thought of providing for myself is satisfying. There is nothing like sitting down with a steak that you procured yourself by hunting.

‘It’s a lifestyle, and as much I enjoy going hunting and killing an animal myself, I enjoy just as much seeing Rikke do it. It’s an adventure every time we go out.’

Almost every animal they kill, they eat, except for foxes, which they say they must kill to control the population.

Rikke explains that the sisters have felt remorse over the animals they’ve hunted.

She said: ‘Hunters do have a heart for animals, so of course we sometimes think about why we are doing it.

‘I think all hunters feel remorse over the animals they kill because we do not hate them, we respect them.’

But still, they think they are doing the environment a favour by sourcing their own meat.

‘Hunting is the most self-sustainable you can get; hunting gives you the freshest, healthiest and most ethically killed meat. That’s why we hunt.’

END_OF_DOCUMENT_TOKEN_TO_BE_REPLACED

END_OF_DOCUMENT_TOKEN_TO_BE_REPLACED
We and our partners use cookies on this site to improve our service, perform analytics, personalize advertising, measure advertising performance, and remember website preferences.Ok