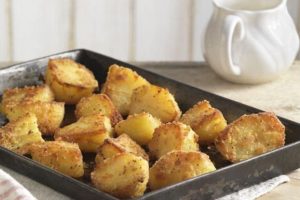 Roast potatoes can take around two hours to cook, from par-boiling to steaming and then finally roasting. But one savvy cooker has shared her method to cooking roast potatoes – without using an oven or air fryer.

Air fryers are currently the most popular kitchen appliance, with millions of Brits favouring the gadget to cook their dinner.

And while they are convenient to make quick and healthy foods, there’s another kitchen appliance to use for roast potatoes.

Ria McCullough shared her method in the Slow Cooking UK Facebook group and claimed her take on the roast potato recipe was so good that she’ll “never cook them conventionally again”.

To begin with, Ria chose Navan potatoes – one of the first varieties to be bred from Maris Piper.

After peeling and cutting the potatoes, she parboiled them for 10 minutes in a saucepan on the hob, before letting them steam dry in a colander.

While the potatoes were steamed, she added a few shakes of flour, salt, pepper, onion granules and sage before shaking the spuds up.

Ria then added a “few glugs” of olive oil to the slow cooker before turning the temperature to high.

Once the oil was hot, she put the potatoes in the slow cooker and made sure all sides of the spuds were covered in oil.

She then cooked the potatoes on high for four hours with a tea towel underneath the lid, “turning twice in between”.

After four hours, the potatoes emerged golden and crispy.

Hundreds of other social media users commented on her post.

Lesley Kinchin said: “They are amazing, a little bit of oil. Didn’t realise I could use the SC [slow cooker] for anything other than a casserole.”

Lindsay Potter agreed: “Never thought of doing roasties in my SC, but they sure do look amazing.”

LeaLea Holmes: “OMG you’ve just saved my Sunday roasts (until I finally get a new oven that is lol) beauties.”

While cooking roast potatoes in a slow cooker takes double the time than in an oven, the appliance uses much less energy.

Express.co.uk recently revealed a slow cooker was the third cheapest household appliance to use to cook.

According to Feed Your Family’s Cost of Cooking, the slow cooker takes 16p per day to use versus an electric cooker which costs 87p.

A dual fuel cooker (gas and electric) will set you back 72p whilst a gas cooker is 33p.

On the other end of the scale, the cheapest appliance is the microwave at just 8p and the air fryer is 14p.