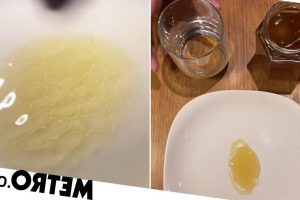 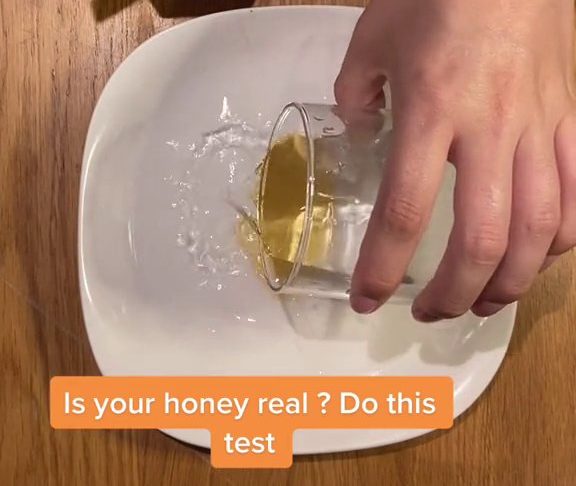 Honey has a whole host of health benefits, and is an all-purpose food product that can shine just as much in your morning porridge as it does in a stir fry sauce.

However, not all honey is created equal.

According to compliance management company Decernis, the sweet nectar is the third-most-faked food in the world, behind milk and olive oil.

For years, regulators have been trying to clamp down on manufacturers replacing real honey with substitutes like high-fructose corn syrup or beet syrup, with analysis suggesting anywhere between 25% and 70% of the honey people buy is fake or adulterated.

This is partly an issue because it’s not honest to the consumer, as well as because it undercuts beekeepers and promotes apiary practices (like focusing on pollination over honey production) that put bees at risk.

According to honey producer Mercia Honey, the best way to spot fake honey is to use a flat bowl or plate and some water.

Sharing their tip on TikTok, the beekeeper explained that putting a blob of honey onto a plate and a few drops of water on top is all it takes.

If you shake the plate, you should see honeycomb type shapes forming on the surface of the honey. If it’s not real honey, Mercia Honey claims it’ll either dissolve in the water or show no defined shape.

Mercia Honey says that this is because honey has ‘genetic memory’ that helps it keep the shape it once held in the hive.

Scientists have debated this, with University of the Sunshine Coast’s Dr Peter Brooks, a chemist with extensive knowledge of the chemical composition of honey, saying it’s all dependent on the quality of the honey (or not) you’ve purchased.

He told ABC: ‘I imagine honeys we test in our labs, half of them would pass these tests and half would fail, almost randomly.

Some have suggested it’s the viscosity and specific texture of thicker varieties of honey that causes the hexagonal ripples, and Dr Brooks concluded that there’s no definitive way to verify it at home.

It may not be a conclusive test, but it’s one that’s been demonstrated again and again on #savethebees TikTok. If you’re in doubt, shop local or from small business where possible. This way you can directly ask them about their hives and the quality of their honey.