What to eat at Avanti's brand new Boulder food hall 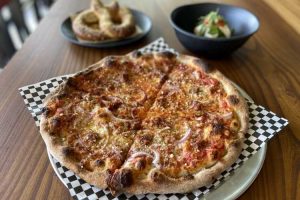 Five years after Avanti opened in Denver’s Lower Highland, the food hall has expanded with a second, sprawling location in central Boulder, opening Saturday. At first glance, there’s no cheesecake on the menu.

But five stalls on the first floor are turning out Taiwanese, Israeli, Venezuelan, delicatessen and farm-to-table foods. There’s a coffee shop from Method Roasters and a full bar. (Check out Avanti’s own canned vodka soda, if that’s your thing.)

And then the real show-stopper comes upstairs. You’ll take the elevator to the fourth floor and emerge onto what is probably the region’s best rooftop. Open air is a precious commodity, and Avanti is utilizing every last ounce of it here. Add in near-360-degree views, a pizza counter and another bar, and you’ll almost forget about whatever’s going on in the news.

RELATED: 8 new Denver restaurants to get excited about this season

(Don’t worry, Avanti owner Patrick O’Neill is serious about coronavirus precautions. He says the new location is fortunate to have ample space for customers to spread out.)

“This is going to be around for awhile; we have to figure out a way,” he said of moving forward with the opening after nearly two years of development and construction. “We’ve gotta go for it.”

Here’s what to expect when you go.

The story: Childhood friends Chase Devitt and Charles Troup think Colorado could use some more fast-casual Middle Eastern food. Their restaurant’s name is a Yiddish term of endearment (Troup’s nana called him that as a kid), and the menu is inspired by Israel’s street food culture. You might have tried Devitt’s cooking, too, at Denver’s Brider and Mr. Miner’s Meat and Cheese in Golden.

The food: Real shawarma, a near-perfect falafel and staples like tabbouleh, labneh and more combine well for dipping and sharing. Try the fried cauliflower hummus bowl ($12) and wash it down with a vegan tahini date smoothie ($8).

The story: Longtime Boulder chef Steve Redzikowski (Oak at Fourteenth) gets back to his East Coast roots and his early kitchen career working a pizza oven. His pie style here pairs classic Neapolitan ingredients with that foldable New York crust. For an idea of his labor of love: Three kinds of flour and a three-day ferment go into the pizza dough.

The food: You can’t go wrong with the pies, but meat lovers should start with the Annie, named after Redzikowski’s wife, topped with red sauce, mozzarella, spicy sausage, onion and oregano ($14). If you just need a snack, go for the fresh-baked soft pretzel, with melted grana padano cheese, Calabrian chili and fennel ($6).

The story: Friends and chefs Darren Chang and Travis Masar moved from Los Angeles back to Colorado to open this first iteration of their first Taiwanese restaurant concept. You might recognize Masar from his time as a contestant on “Top Chef,” or as the opening chef of Denver’s Uncle ramen restaurant. Most recently, the two worked side by side at Ms. Chi Cafe, Shirley Chung’s Culver City Chinese food spot.

The food: While Chang grew up with these dishes and Masar started cooking them later in life, the pair combine some serious talent to create their own versions of Sichuan hot chicken bao buns ($3.50), hand-cut noodles ($11-$14) and addictive drinks and sweets. Try the brown sugar milk tea ($4.50) and seasonal popsicles in flavors like corn pop with miso caramel ($3).

The story: Igor and Beckie Panasewicz thought last year was big. In April 2019, they finally opened the first brick-and-mortar location of their decade-old Venezuelan food truck. Three days after opening, Igor became a U.S. citizen. But 2020 had something else in store. The couple has been able to keep both their Avanti Denver stall and their Platt Park restaurant afloat with the help of a payroll protection loan and a James Beard Foundation grant. Now they’re opening a third location and ready for “whatever happens up here,” Beckie said.

The food: After a decade in business and dozens of versions, the arepas are dialed in for this Boulder debut. Masas are all gluten-free (they’re made of corn) and fillings range from vegetarian (try the original with black beans, avocado and plantains, $9.99) to very meaty (try the stewed beef pabellon, $12.99). Arepas are enough on their own, but if you need a snack, order a side of crispy-sweet plantains ($5.99) with guasacaca (avocado-cilantro sauce).

The story: Former Denver chef Nicholas Kayser left his longtime post at Vesta (now closed) to start Rooted Craft American Kitchen on his own. His focus is “well-sourced American food,” he says, from burgers to fried chicken and more. But the real draw here will likely be the seasonal vegetarian or vegan options and the zero-proof cocktails, two subjects Kayser’s passionate about.

The food: Ask about the daily farmers market meal (MP), with fresh ingredients sourced directly from Boulder farms. Or go for the hearty English pea and asparagus toasted farro risotto (a favorite from his Vesta days, $10). Pair your dish with a housemade shrub, like strawberry black pepper or stone fruit, and soda to drink ($6).

The story: Jewish delis are hard to come by in Boulder anymore. Harder still are Jewish nachos, which Rye Society partners Jerrod Rosen and Ross Goldberg are serving alongside some more traditional fare and a few other oddball delights. Rosen got his delicatessen start in Denver’s Five Points neighborhood, where his family has a long history in the service industry. Many of the recipes at Rye Society’s Denver and now Boulder locations have been passed down through generations.

The food: About those nachos — they’re bagel chips loaded with pastrami, Swiss cheese, pickled onion, slaw and Russian dressing ($9). Something more traditional to nosh on, though, would be latkes with apple sauce and sour cream ($6). The 18+1 is a fine pastrami sandwich ($15.50) and Rosen’s aunt Cindy’s rugelach ($2.50) are the best in town.

Subscribe to our new food newsletter, Stuffed, to get Denver food and drink news sent straight to your inbox.

END_OF_DOCUMENT_TOKEN_TO_BE_REPLACED

END_OF_DOCUMENT_TOKEN_TO_BE_REPLACED
We and our partners use cookies on this site to improve our service, perform analytics, personalize advertising, measure advertising performance, and remember website preferences.Ok