Why you should think twice about buying K-Cups 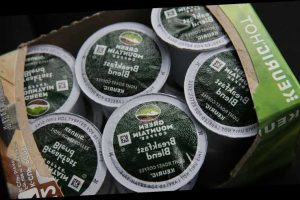 If you’re the only person in the house who drinks coffee, it’s hard to beat the convenience and quickness of making an individual cup of Joe with a K-Cup. Not to mention that the Keurig may be the greatest thing to happen to office break rooms in decades. But if you’re health conscious, concerned about the environment, or looking to make more economical decisions where it comes to your morning caffeine hit, it turns out there’s a lot not to like about K-Cups and the machines that use them.

Let’s start with cost. You may feel like you’re making a more financially responsible decision by brewing a single cup of coffee rather than a whole pot, some of which might be wasted, but when you compare the cost of K-Cups to coffee beans, the markup for those individual little cups is incredible. Coffee in K-Cup form is a whopping five times more expensive than coffee beans. A pound of K-Cup coffee goes for roughly $50, while a one-pound bag of some of the most expensive coffee on the market, Starbucks, will cost you $12 (Spoon University). Yikes. Talk about the price of convenience!

K-Cups are terrible for the environment

Recently-released biodegradable brands excluded, K-Cups are immensely unkind to the environment because they create a staggering amount of waste. And not just any waste: plastic waste, which is not biodegradable. For every six grams of coffee, K-Cup use creates about three grams of waste (Spoon University). While the cups seem tiny individually, and tossing one into a trash can hardly seems that bad, consider how many you use per week, now multiply that by everyone in your office, and multiply that by every office on the planet using these things. To put it in perspective, in 2014 Mother Jones estimated that we had disposed of enough K-Cups to wrap around the world 10.5 times. And that was six years ago; we hate to imagine how far we could travel on a street of K-Cups now.

Further, most K-Cups contain aluminum, which isn’t something you want leaching into the earth and waterways, as it can be highly toxic at high levels, especially to aquatic life (via Environmental Geochemistry and Health). And even when it is recycled, the process of recycling aluminum creates toxic byproducts that themselves have to buried in a landfill anyway. Sticking to a regular old bag of coffee eliminates this problem entirely.

K-Cups and Keurig machines aren't great for your health

While most K-Cups tout that they are free of BPA, a cancer-causing and hormone-disrupting chemical once found in most plastics, even this “safe” plastic can have harmful effects when heated. When you come into contact with these plastic chemicals, they can act like estrogen in your body, affecting your hormones and your health (Women’s Health).

And if that weren’t gross enough, consider Keurig machines themselves; when was the last time you cleaned the one in the office break room? You may think “well, only hot water runs through the thing, surely it’s self-cleaning?” But you would be wrong. If this type of machine is not cleaned out thoroughly and regularly, it can become a veritable breeding ground for bacteria, fungi, and mold. A study conducted in 2015 swabbed the various parts of 29 Keurig coffee makers and sent samples to a lab to be analyzed. One swab from a machine in Pittsburgh contained 4.6 million colonies of bacteria and mold, and E.coli showed up on a machine in Dallas. More than half of the machines came back with bacteria counts in the millions (HuffPost). Ick isn’t a strong enough word.

So while making a quick cup of K-Cup coffee in a waiting room while you await an appointment probably won’t be the end of the world, you may want to rethink your daily coffee routine if K-Cups are part of it.