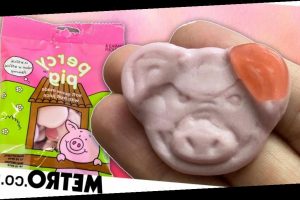 Millie Watkins was surprised to find an ‘evil and sinister’ one-eared Percy Pig in her bag full of friendlier versions.

The student nurse from Worcester, West Midlands was relaxing with her boyfriend and treating herself to a bag of the grape and raspberry-flavoured sweets when she came across the one that gave her pause.

Millie, 27, took a picture of the glaring pig and his creepy grin to send to her friend before eating it.

She said: ‘He looks really, really sinister, I think it’s the fact he’s got a furrowed brow and only has one proper ear and the other one’s not there.

‘When I told a friend about it she said “oh my god maybe he’s been fighting with Colin the Caterpillar”.

‘He would definitely be the villain in a cartoon. No big bad wolf is going to touch this Percy Pig, they’re going to go “oh I don’t want to go near him”.

‘It’s a Percy Pig, I couldn’t not eat it, but I wanted to show friends what he looked like. He tasted just as good as any other one.’

Mille picked up the packet of pigs at the M&S Foodhall at Blackpole Retail Park in Worcester on October 25th.

She said:  ‘I popped into M&S to get a few bits and bobs for dinner.

‘Percy Pigs are my little vice, I love them and I bought myself them as a little treat.

‘I was munching on them when I was at home and then thought “oh my god look at this pig, he looks so angry”.

‘I didn’t squash him at all, he was like that when he came out of the packet.

‘It was really bizarre, there was no flattened part on him, his face was just like that. He’s got a proper angry face.

‘I was with my boyfriend when I opened the bag, he rolled his eyes and called me daft at the time – he laughed about the pig too.’

Even though the pig looked mean enough to scare off a hoard of Colin the Caterpillars, Millie hasn’t been put off eating Percy Pigs.

She said: ‘I didn’t see any others like that in the packet, it was just a pure one-off. It was just a pig having a bad day.

‘It’s not put me off having them in future.’

Percy Pig himself has even apologised for the sinister pig’s presense in the bag, saying: ‘What can I say, we all have our off days.

‘I’m a very good-natured pig most of the time, but Millie must have caught me before my morning mud bath.’

MORE : You can now buy a Percy Pig celebration cake – and it is very pink