Home » Food & Drink » You can now get vegan pepperoni pizza at Morrisons for just £2.50

You can now get vegan pepperoni pizza at Morrisons for just £2.50 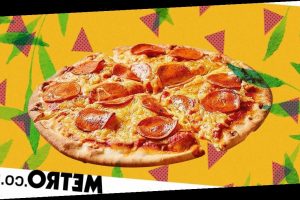 If you think you’ve got to fork out a fortune on plant-based pizza, think again – because Morrisons has just released a bargain-value cruelty-free pepperoni offering.

Mo’s vegan pepperoni ‘tastes just like the real deal’ but instead of slices of dead animal, it’s topped with discs of spicy pea protein.

While there are other cheap highstreet options, Morrisons is the first supermarket to offer an own-brand vegan pepperoni option.

‘You really won’t believe it until you’ve tried it.’

Pepperoni ‘has long been voted the UK’s favourite pizza topping’, according to the supermarket’s press release, and this new plant-based item ensures that all of us get a slice of the action.

It’s just the latest development in the gradual move towards reducing our meat consumption in the UK, with supermarkets expanding their vegan ranges or launching plant-based collections afresh.

According to a study by The Vegan Society, one in five Brits has cut down on meat consumption during the pandemic. It found that 41% of those who had cut down on their meat consumption did so because their preferred product simply wasn’t available at the supermarket, while 43% claimed their dietary switch was down to health, environmental or animal rights reasons.

You can find the Morrison’s No Pepperoni pizza on the pizza counters in most stores nationwide.