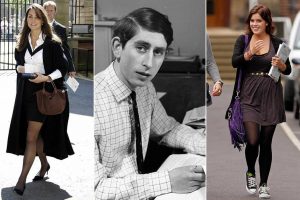 One of the biggest decisions for students heading to university at this time of year is organising their accommodation, whether they opt for one of the halls of residences or off-campus accommodation. And it’s got us thinking – where did royals such as Prince William, Zara Tindall and Prince Harry live?

They may now reside in beautiful royal residences such as Kensington Palace, but some of them left behind the luxuries for more modest accommodation with their peers. Take a look back at where the royals lived and studied…

Both Prince William and Kate lived in St Salvators Hall of Residence in their first year of university at St Andrews, which is where they met. The rooms would have been a far cry from the stunning homes William was used to growing up, with photos shared from inside the halls in 2000 showing the basic furnishings provided to students.

MORE: Take a look inside Prince William and Kate’s home at Kensington Palace

WATCH: Inside the most incredible royal homes of all time

The Prince of Wales studied anthropology, archaeology and history at Cambridge University where he lived in Trinity College. One snap taken inside his lodgings in 1967 shows Prince Charles sitting at a desk strewn with papers, while a lamp and family photo can be seen in the background. The room is decorated with floral curtains and wooden furniture, with a fireplace on one wall.

While Prince Harry didn’t attend university, he did share a look inside his dorm room while he attended Eton College as a teenager. Photos of Prince Harry in his bedroom resurfaced in 2018, showing how he was just like any other teenager, and had lined the walls with posters torn out of magazines, an England flag, and a portrait of his mother, Princess Diana.

The late Princess Margaret’s grandson Sam Chatto and his brother Arthur both studied at Edinburgh University. Budding artist Sam shared a peek inside his Edinburgh home in an Instagram post, with colourful bunting hung in the window and lots of plants along the windowsill.

GALLERY: Best photos of the royals on their first day of school

During her time at Newcastle University, Princess Eugenie is said to have lived in the Castle Leazes student residence, where rooms ranged from £102 to £175 per week. It’s likely the Princess opted for a single en suite room, which would have also been catered and has access to a shared kitchen.

Like Sam and Arthur, Lady Amelia Windsor also studied at Edinburgh University. The model previously shared a look inside her student digs with a selfie in her bedroom, which had photos pinned onto the walls and around the mirror, and fairy lights hanging on the walls.

RELATED: Where does the royal family live?

It's safe to say Princess Beatrice didn't have the average student experience, deciding against staying in halls of residence in favour of an apartment within St James' Palace. As she was only studying at nearby Goldsmiths University, it made sense for Beatrice to stay in her royal residence.

Princess Marie Chantal shared a photo many parents could relate to over the summer in 2019, showing how they were preparing their son Prince Achileas for his studies with a trip to US homeware store Bed, Bath, and Beyond. "Dormlife," she captioned the photo. The Princess later shared a photo of the teenager in his new room, which was equipped with a single bed, bed and chest of drawers.

MORE: Inside the Greek royals' houses around the world

Long before meeting Prince Harry or embarking on her acting career, Meghan Markle studied theatre and international studies at Northwestern University. While there, the future royal lived in the North Mid-Quads dorm, which is home to 85 students across 31 double rooms and 23 single rooms, and has a communal lounge area.

Princess Anne's children both studied at the University of Exeter. While Zara has a degree in Physiotherapy, her older brother studied Sports Science. It is not known where they lived on campus, but they would have several accommodation options to choose from, including Lopes Hall and Pennsylvania Court, which has single en-suite rooms with a utility room and on-site catering.