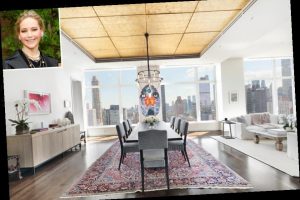 The property is located on the top floor of The Laurel, a condominium tower that offers amenities like a concierge, library and an infinity lap pool.

The more-than-4,000-square-foot pad features three bedrooms, four and a half baths and a gas fireplace. This new mom recently showed off how she put her interior design skills to use in her New York City apartment on Instagram.

According to the New York Post, Hadid purchased two apartments in her building in Manhattan and combined them. The first apartment is a two-bedroom, 2.5-bathroom unit with a chef’s kitchen, while the second has three bedrooms, 3.5-bathroom, and includes a landscaped private terrace with a fire pit and barbecue grill.

In July, she shared an exclusive look inside the apartment with fans, giving them an inside look at the eclectic design choices within her Bohemian-inspired home, which include a bathroom covered in old New Yorker magazine covers and a kitchen equipped with glass-front drawers filled with colorfully dyed pasta.

In October, PEOPLE confirmed that the Thelma & Louise star, 74, had sold her pre-war duplex, located in the Chelsea neighborhood of Manhattan, for $7.9 million. The 6,061-square-foot space, which takes up the seventh and eighth floors of a co-op apartment building, was Sarandon’s family home for 30 years.

The actress purchased the home with her then-partner, actor Tim Robbins, back in 1991, and took full ownership of it upon their split in 2011, the Wall Street Journal reported.

The exes share two sons — Jack, 31, and Miles, 28 — and Sarandon has daughter Eva, 35, from a previous relationship. All three kids grew up in the six-bedroom, five-and-a-half-bathroom home, and now that they have moved out Sarandon told WSJ it is simply too large for her needs. The Power actress and her 13-year-old son, Kiyan (whom she shares with Carmelo Anthony), live together in an airy and sophisticated, 2,300-square-foot loft in Manhattan.

Though she did hire a decorator to spruce up the three-bedroom, three-bath place with a “cool, young, modern” vibe, Anthony says she prioritizes comfort over flash.

“I’m not about living in a museum and not being able to touch things,” she told PEOPLE in July 2019. “I care more about it being a family home than an elegant home.” In September, PEOPLE reported that the Jonas Brothers singer and the Game of Thrones actress were bidding farewell to their New York City home following the birth of their first child, daughter Willa, in July.

They listed the 2,907-square-foot condo, located in Manhattan’s Nolita neighborhood, for $5.9 million. They purchased it for $5.5 million two years ago.

According to Variety, the couple have settled down in a baby-friendly Los Angeles contemporary mansion, located in the Encino neighborhood, which they purchased for $14.1 million before they welcomed Willa. The Shark Tank investor is known in her industry as the queen of New York real estate, and her castle, a four-bedroom, seven-bath penthouse on the Upper East Side of Manhattan, is appropriately lavish.

The two-story apartment has stunning views overlooking Central Park, and the savvy investor spent two years renovating the place, flipping the upstairs and downstairs floor plans and transforming a historic greenhouse into her light-filled kitchen.

“Even on rainy, dire, dismal days, this place is sunny,” Corcoran told PEOPLE in 2018. “It’s like living on top of the world.”

In January, the Oscar winner, 71, officially sold her Manhattan penthouse after almost a year and a half on the market. The actress first listed the nearly 4,000-square-foot apartment with Douglas Elliman back in August 2018 for $24.6 million. It was eventually sold by Sotheby’s International Realty for $15.8 million — almost $10 million less than the initial asking price.

The bright four-bedroom, four-and-a-half-bath penthouse features floor-to-ceiling windows with views of the Hudson River, Statue of Liberty, and the Chrysler and Empire State Buildings.

Streep and her husband, Don Gummer, bought the condo at River Lofts in 2006 for $10.13 million, according to Business Insider. The building has previously housed other celebrities, including Gwyneth Paltrow. The Lovecraft Country actress, 37, and the One Tree Hill alum, 42, who tied the knot in 2015, recently purchased a condo in the Fort Greene neighborhood of Brooklyn, and PEOPLE got a peek inside after they completed their renovations.

“We really used quarantine to put the space together ourselves,” Chung told PEOPLE of renovating during the coronavirus pandemic, noting that “it was a lot of furniture building for my husband and me, but we were blessed with having a roof over our heads and being able to spend that time together.”

“This is our forever home,” she added of the condo. “We’re not getting rid of it.” In October 2019, The Bachelorette alum moved into a luxury high-rise apartment on the Lower East Side with his best friend — and future Bachelor — Matt James.

Their shared home has floor-to-ceiling windows that offer a stunning view of Lower Manhattan and let in plenty of natural sunlight. The apartment complex boasts basketball courts, a bowling alley, a spa, a wine room, and gardens.

The living room is where the roommates held gatherings before quarantine — often seated at a marble-top tulip table that Cameron told PEOPLE is his favorite piece in the house.

Merry Christmas from us & Anna Wintour.

The Modern Family star and his husband Justin Mikita gave their Big Apple apartment a makeover last year, as they plan to spend more time on the East Coast now that the show has ended and they’ve welcomed their first child, son Beckett, three months.

They’re raising Beckett in a two-bedroom, two-and-a-half-bath home in the Chelsea neighborhood of Manhattan.

“I feel very at home here,” Ferguson told Architectural Digest in February. “I was strictly a theater actor before moving to Los Angeles, so New York sort of feels like my true home.”

The 1,500-square-foot apartment boasts an open floor plan. The pair’s personality can be seen throughout the home, most notably in a bathroom with black and gold wallpaper. Custom designed by John Robertson, that showcases the couple’s favorite New York scenes and a drawing of their beloved dog. In 2018, the Real Housewives of New York City star left behind her Upper East Side, 5-bedroom, 5.5-bath townhouse and moved into some sleek new digs overlooking Manhattan’s Columbus Circle.

“I found a great apartment. It’s so my style. I have a fireplace and a little balcony,” she said during a Real Housewives reunion special in September 2018. “It’s not too high rise, ‘cause I don’t like high rises. I’m only on the 12th floor.”

In a Bravo video home tour, Morgan showed off the pink kitchen, living room with a working fireplace and a large master suite. The former New York Knick, 36, who now plays for the Portland Trailblazers is asking $12.85 million for the five-bedroom, four-bathroom condo located in the Chelsea neighborhood. Kevin Mallen and Michael Graves of Compass hold the listing.

The unit is the building’s largest, spanning 4,556 square feet with 10-foot ceilings, white oak floors, and over-sized casement windows that flood the apartment with natural light.

The unit “is accessible via a private elevator landing that opens up to a wide entry foyer,” according to the listing. It has 360-degree views and a private balcony overlooking one of New York’s most unique parks.

END_OF_DOCUMENT_TOKEN_TO_BE_REPLACED

END_OF_DOCUMENT_TOKEN_TO_BE_REPLACED
We and our partners use cookies on this site to improve our service, perform analytics, personalize advertising, measure advertising performance, and remember website preferences.Ok