Home » Chip Gaines Is Putting $1,000 Checks in Some Copies of His Upcoming Memoir No Pain, No Gaines

Chip Gaines Is Putting $1,000 Checks in Some Copies of His Upcoming Memoir No Pain, No Gaines 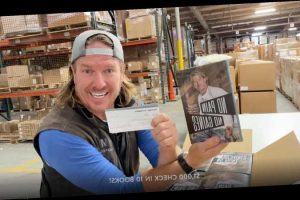 Chip Gaines is giving away a chunk of change to some lucky fans.

On Monday, the 46-year-old Fixer Upper alum revealed in a video shared on Instagram that he is hiding $1,000 checks inside 10 copies of his forthcoming self-help memoir, No Pain, No Gaines, out March 16.

"Today is book day," Chip says in the clip, for which he jokes he snuck into the warehouse where they're being stored. He beams with pride about his upcoming release as he explains, "If you're lucky enough to pre-order at the right exact second, you will find a $1,000 check."

In the caption of his post, Chip also notes that there is an opportunity for fans to win "a weekend in Waco to experience all things Magnolia." The Texas city is home to Chip and his wife Joanna's Magnolia Market at the Silos shopping and dining destination.

Chip notes in the video that he's placed the checks next to page 16 in the books — a nod to his family's favorite number. Joanna Gaines recently detailed the significance of 16 during Breaking New Ground: Expanding the Silos, a new 45-minute special documenting the recently completed expansion of the Silos.

Not only is 16 Chip's special number, but Joanna said it's also become "a family number" — all their kids use it on their sports jerseys. Joanna even has plans to get a tattoo of the digits on the inside of her wrist as a tribute to her husband after he's gone.

One of the pair's new stores in Waco is also dubbed No. 16 and is filled with Chip's favorite things.

Chip's upcoming book is his second release. His first memoir, Capital Gaines: The Smart Things I Learned Doing Stupid Stuff, came out in 2017.

It will focus on the importance of surrounding yourself with the right people, and how Chip and Joanna's own network helped them get where they are today.

"I have always known deep in my bones that hard work yields great results, even when there may be little to show for it," Chip told PEOPLE exclusively late last year. "Jo and I have built and lived our entire lives around this notion. We have put decades of hard work and grit and a whole lot of sweat equity into the work we do, and now we're launching into what might be the hardest work we've ever done, building a [TV] network." The couple's Magnolia network will launch on a digital app July 15, 2021, and as a TV channel in January 2022 after a series of Covid-related production delays. .

"What I am interested in is 'network,' the noun. The group of people in your life and in mine with beating hearts and passions who live and love and try and fail and try again. That's what this book is about," he continued. "I want you to build a network of people who will stand beside you as you bust your butt to do the same for them, who believe that authentic human connection is more important than any other earthly thing, who bet on each other instead of the way of the world, and who agree that the phrase 'it's just business' isn't gonna cut it."

"Building this kind of network requires a lot of hard work, painfully hard work at times," he added. "But ultimately what you gain is something strong, something reliable, something to be proud of — and in my opinion something worth writing about."

No Pains, No Gaines is set to be released on March 16, and is available now for preorder.