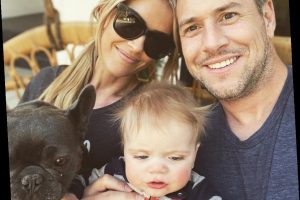 Christina Anstead has filed for joint custody of her 14-month-old son Hudson London, whom she shares with ex Ant Anstead.

The Christina on the Coast star, 37, is seeking shared physical and legal custody of Hudson, PEOPLE can confirm. The news comes just a week after PEOPLE reported that Christina had officially filed for divorce from the Wheelers Dealers host, 41, after less than two years of marriage, and almost two months after she announced their split via Instagram.

Hudson is the only child the former couple share. Christina also shares son Brayden James, 5, and daughter Taylor Reese, 10, with ex-husband and Flip or Flop costar Tarek El Moussa, while Ant is also dad to daughter Amelie, 17, and son Archie, 14, from his previous marriage to ex-wife Louise Herbert.

Christina and Ant began dating in October 2017 and married at their home in Newport Beach, California, in December 2018.

Last week, Christina took to Instagram to clap back against claims that she is an absent parent — particularly compared to Ant and El Moussa — simply because she doesn’t post about her kids on social media as often as her ex-husbands do. "Smh wake up people. I hardly post anymore … and I def do not want to post my kids every freaking day to make it a contest of who's a better parent 🤦🏼‍♀️ f that," the mom of three wrote in the caption of a mirror selfie. "This doesn't mean I'm not with my kids — it means the opposite — I am with them — I'm present."

"Stop parent shaming people, stop choosing sides when there is no side to choose,” she added. "My point being — when you see stuff on here take it all with a grain of salt. There is a whole lot of Filters and fake smiles. I've been guilty of faking it too. We are all struggling — some of us are just better at 'masking' it."

The HGTV star first shared the news that she and Ant had split on September 18, shocking fans.

"Ant and I have made the difficult decision to separate. We are grateful for each other and as always, our children will remain our priority," Christina wrote in an Instagram post. "We appreciate your support and ask for privacy for us and our family as we navigate the future."

Shortly after the news broke, a source told PEOPLE that Christina and Ant had been struggling with their relationship for a year — since the birth of Hudson. “After the baby, they started having conflicts,” the source said.

Despite her full house, the source said Christina was left feeling “lonely and unhappy” with her home life. “Christina found it difficult to balance everything” and “their marriage was struggling.”

The source went on to share that although things may be tough right now, Christina is remaining optimistic about her future: “She never expected to get a divorce. But she is doing okay and focusing on the kids.”

END_OF_DOCUMENT_TOKEN_TO_BE_REPLACED

END_OF_DOCUMENT_TOKEN_TO_BE_REPLACED
We and our partners use cookies on this site to improve our service, perform analytics, personalize advertising, measure advertising performance, and remember website preferences.Ok