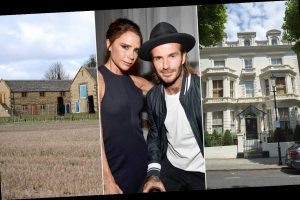 David and Victoria Beckham own two stunning homes with their children: one in London and another in the Cotswolds. The family often share glimpses inside of each property on social media, and a recent post by David has given fans an idea of how they will be decorating for the new season.

Along with his daughter Harper, they have made their very own autumn wreaths, featuring a combination of green foliage and pink and purple flowers. David captioned the image, “Such a fun day making our autumn wreaths.”

The family tends to split their time between the two homes, and so it makes sense that they would have a wreath displayed on each front door.

David and Harper made their own wreath

Their house in London has an enormous black doorway with plenty of space for the wreath, as part of a porch with black and white tiles on the floor.

The entrance to the Beckhams’ home in London

In 2017, the family opted to decorate their home entrance in a different way: with a Halloween theme. They dressed their black wrought iron canopy with lights and skeletons, as shown in a photo of David on a ladder. Victoria captioned the snap, “@Davidbeckham is such a good daddy!!! Don’t slip! Be careful and watch that ladder.”

The rustic aesthetic of their country retreat in the Cotswolds, meanwhile, would make an equally appropriate home for their new wreaths. It’s built with an exposed brick exterior and surrounded by plenty of woodland and plants. Inside, the property follows a similar design with exposed brick walls, tall ceilings and a selection of wooden furniture.

Victoria and David live with their four children Brooklyn, Romeo, Cruz and Harper, while Brooklyn’s new fiancée Nicola Peltz has also been staying with the family since the couple moved back to the UK after spending lockdown at Nicola’s home in New York.

END_OF_DOCUMENT_TOKEN_TO_BE_REPLACED

END_OF_DOCUMENT_TOKEN_TO_BE_REPLACED
We and our partners use cookies on this site to improve our service, perform analytics, personalize advertising, measure advertising performance, and remember website preferences.Ok