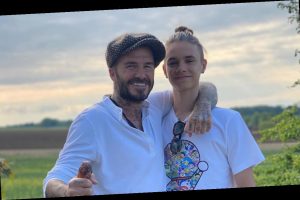 David and Victoria Beckham have spent the past four months at their Cotswolds home during the coronavirus lockdown, and it appears they have made some big changes at the property in that time.

The retired England footballer recently revealed a look at the newest addition to their country retreat – a five-a-side football pitch – but it has reportedly come at the expense of another of the home’s most extravagant facilities; the couple’s 17-year-old son Romeo‘s tennis court.

WATCH: David Beckham shares a look at his football pitch

David and Victoria splashed out an estimated £30,000 to install the tennis court in the grounds of their second home back in 2018, when the teenager was pursuing a career as a professional tennis player. Romeo had training sessions with top players including Andy Murray and Grigor Dimitrov, but his enthusiasm for the sport has reportedly since diminished, leading David to take the drastic step of bulldozing the tennis court.

The Beckhams previously had a tennis court at their Cotswolds home

As reported by The Sun, the dad-of-four has now had a football pitch installed in its place, which he showed off on Instagram when he enjoyed a kick about with Romeo. Sharing a short clip of the father-and-son duo kicking a ball, he said: “Practice makes perfect. Like father like son.”

The tennis court has reportedly been replaced with a football pitch

The Beckhams’ football pitch is located at their Cotswolds home and it is cordoned off by a wired fence. On the sides, the former footballer has installed a wooden viewing platform so friends and family can watch and cheer along from the side-lines whenever there is a match happening.

Romeo isn’t the one that has been making the most of the pitch. Back in June, proud dad David shared a video of his daughter Harper scoring a goal whilst on the family’s pitch. “Bend it like Harper (BECKHAM),” he captioned it.