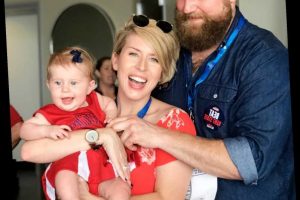 After nearly 12 years of marriage, Erin Napier is still head over heels for her husband, Ben — and she recently took to Instagram to share what it is about him that makes her swoon.

The Home Town star, 35 — who costars in the hit HGTV show alongside Ben, 37  — shared a candid photo on Tuesday showing her woodworker husband in his workshop, focused intently on a project. In the caption, she shared a sweet message honoring him and others that share what she sees as some of his best qualities.

“Just a post in praise of the men who go to work before the sun comes up and come home with bloody hands and dusty boots,” she writes. “Who make bacon just right, who snore a little if they get still in a chair at 8:30 pm, who stand up for the ones getting picked on, and always jump up to help move the heavy thing — furniture or worries.”

“(That’s you @scotsman.co),” the mother of one concluded the post, tagging her husband.

Ben and Erin have been together for over 16 years, after meeting while attending Jones County Junior College in Mississippi.

“He was like a celebrity crush to me,” Erin told PEOPLE in an April 2020 cover story , admitting that she admired her husband-to-be from afar. “He was the president of every club and very popular but not exclusive. I would see someone eating alone in the cafeteria, and there was Ben, pulling up a chair beside them.” The secret attraction was mutual. “I remember seeing Erin the first week of school,” Ben said. “She was walking across the student union, and she had a pixie haircut. I didn’t know what a pixie cut was at the time, but I knew I liked it.”

Still, they didn’t hit it off right away. During a chance meeting at McDonald’s, “I was so nervous talking to him I crashed and burned,” Erin said with a laugh.

“We had about three more encounters like that,” she admitted. It wasn’t until she interviewed Ben for the school yearbook that they both knew they’d found the one. “Six days later we decided we would get married, and that was that.”

Erin, a graphic designer by trade, and Ben, a former church minister, found HGTV fame after a producer for the network spotted their renovation of the 1925 craftsman cottage they were fixing up for themselves in their hometown of Laurel, Miss.

END_OF_DOCUMENT_TOKEN_TO_BE_REPLACED

END_OF_DOCUMENT_TOKEN_TO_BE_REPLACED
We and our partners use cookies on this site to improve our service, perform analytics, personalize advertising, measure advertising performance, and remember website preferences.Ok