Home » Home and Garden » From Chip and Joanna Gaines to Ben and Erin Napier: Where Celebrity Home Experts Really Live

From Chip and Joanna Gaines to Ben and Erin Napier: Where Celebrity Home Experts Really Live 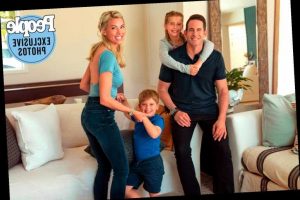 After nine months of dating (they’re now engaged!), the Flip or Flop star, 39, and Selling Sunset realtor, 33, decided to move into a Newport Beach home together just a block from the ocean.

“We’ve absolutely fallen in love with Newport Beach,” El Moussa told PEOPLE. “I was never an outdoor guy before, but now I come home from work and I look outside and there are people everywhere having fun. Now I want to be active with the kids.” He shares Taylor, 10, and Brayden, 5 — who both got to design their own rooms in the house — with ex Christina Anstead.

El Moussa and Young are currently renovating another home in the town with plans to move in next year.

The Gaines family and their Magnolia empire have put Waco on the map, and their little slice of heaven sits on 40 acres of land, offering plenty of space to cook, craft and play with their family.

The Fixer Upper stars’ idyllic farm has a rose garden out back, a barn and pasture full of animals. The home has a large, open kitchen for all of Jo’s creative cooking, and an addition that was built in 2018. The stars of HGTV’s Home Town are proud of their roots — and their family home in the small town of Laurel, where they both grew up. It’s also where they’re raising their daughter, Helen, 2.

Erin has said that the home is a perfect reflection of their family: comfy, Southern, and “a little bit weird.” Many of the pieces in the home have been crafted by Ben, a woodworker by trade.

“My taste never really changed. Since I was old enough to know I loved home design, I’ve loved cozy Americana, worn wood, linen, slipcovered sofas. So I started making my dream home a real one,” Erin recently told photographer Alyssa Rosenheck for her new book, The New Southern Style, of how their home came to be. In 2017, after living in the Hollywood Hills for years, the married Million Dollar Listing: Los Angeles stars decided to purchase a home in Beverly Hills for their growing family. The pair share son Ace, 1, and daughter Alexis, 3.

“We loved the sexy lifestyle of the Hollywood Hills, but as life progressed, we realized we wanted to be in a neighborhood where we could push a stroller around,” Heather told PEOPLE in November 2019.

They moved into a 1930s 6-bedroom, 7-bathroom home — one of Josh’s own listings — which boasts a 6,000-square-foot main house, a guest house, a covered red-brick terrace, along with a cabana, pool and spa. The married Nate & Jeremiah by Design stars own two homes in New York state — one in Manhattan, and one in Montauk — which they share with their two kids, Poppy, 5, and Oskar, 2.

They moved into their West Village townhouse in 2019, after a brief stint in L.A., finding they missed the energy and diversity of New York and deciding it would be a better place to raise their little ones. They bought a newly-gutted, 1899 home and “gave it some soul again,” Brent told Architectural Digest earlier this year.

Their summer home in the Hamptons — where they’ve been riding out the coronavirus pandemic — has just as much soul. The couple collaborated on the renovation and design of the contemporary property, located at the tip of Long Island, and took a carefree approach to the decorating process. After getting engaged in December 2016, the Property Brothers star and his now-wife began renovating a home in Los Angeles — a process which was filmed for a five-episode HGTV series called Property Brothers at Home: Drew’s Honeymoon House.

They moved in after the renovations were completed in late 2017. The home includes a guest suite for Drew’s twin Jonathan, a rooftop deck, a craft room and more.

“We’ve put into it everything we possibly can,” Drew told PEOPLE of the home in December 2017. “We can enjoy it now and we can enjoy it as our family grows.”

Before recently announcing their separation after less than two years of marriage, the Christina on the Coast star and the Wheeler’s Dealers host had been raising their blended family at their home in Newport Beach.

Christina and Ant share son Hudson, 1; Christina shares daughter Taylor, 10, and son Brayden, 5, with her ex-husband Tarek El Moussa; and Ant is father to daughter Amelie, 17, and son Archie, 14, with his ex-wife Louise.

In May 2019, Christina described the property — which served as the venue for the couple’s surprise wedding in December 2018 — to PEOPLE as a “bohemian modern farmhouse.”

“I love when we’re all here together with our noise, our mess, our family,” Ant added of the five-bedroom, five-bathroom property at the time.

END_OF_DOCUMENT_TOKEN_TO_BE_REPLACED

END_OF_DOCUMENT_TOKEN_TO_BE_REPLACED
We and our partners use cookies on this site to improve our service, perform analytics, personalize advertising, measure advertising performance, and remember website preferences.Ok