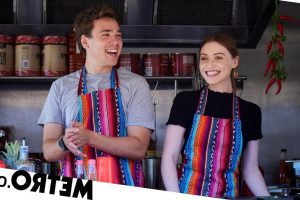 Chloe Anderson (Sam Barrett) is one of several Home and Away favourites who will be left fighting for their lives, after a huge explosion rocks Summer Bay.

The source of the explosion? Why, the food truck, of course, which is Chloe and boyfriend Ryder Jackson’s (Lukas Radovich) pride and joy.

Viewers will know that the loved up couple have been hellbent on making a success of their food truck, but some opposition from Mackenzie (Emily Weir) has made it difficult for them to do so.

That, however, proves to be the least of their worries, when the truck goes boom next week, leaving a number of the soap’s mainstays in deadly danger.

And poor Chloe is among the casualties, as she’s very close to the blast!

‘Chloe is closest to the truck so unfortunately is quite badly injured,’ actress Sam Barrett said. ‘She needs immediate help and is losing a lot of blood.

‘She is rushed to hospital where they do everything they can to minimise the damage that has been done.’

In the wake of the explosion, Ryder is desperate to locate Chloe.

All hope is not lost, however, as actress Sam reckons that Chloe will recover, and that she’ll use her recovery period to decide what’s next.

‘Though Chloe is really setback from all that has happened, she is extremely tough and determined,’ said the star.

‘She won’t let this stop her, but it will put her out for a while. As you can expect though she will use this downtime to her advantage to plot her next move.

‘Ryder always has Chloe’s back and wants to make sure he looks after her during her recovery. He will do everything he can to fix their current situation and the damage that has been done to their business.’

Yes, Ryder is on the warpath in the aftermath of the incident, and given the animosity between he and Mac in recent months, he puts two and two together.

But has he come up to the right conclusion?

‘Based on the tension between Mac and Ryder, he jumps to the conclusion that she’s involved,’ added Lukas. ‘I don’t think he honestly believes that she’s capable of something like that, but he’s just so angry that he wants to blame someone and Mac seems like the obvious choice.’