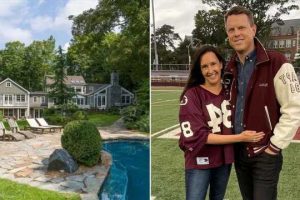 NBC star Willie Geist has given fans a peek into the stunning five-bedroom mansion in South Salem, New York where he is raising his children away from the hustle and bustle of the city.

The news anchor, who in 2003 married his childhood sweetheart Chistina whom he met at the age of 11, purchased the home – previously owned by Stanley Tucci – in 2014 for $1.8 million. The 5,405 square-foot has five-bedrooms and four bathrooms, and an incredible backyard that features a swimming pool, lush greenery and plenty of space for father and son football games.

“Lady Christina steps onto the veranda to greet her public*,” he captioned a post recently of his wife on their bedroom balcony looking out into the distance.

“*My son and me playing football in the yard.”

His daughter Lucie, 14, and 12-year-old son George both live at the home with their parents, although one of the five bedrooms is used for Willie’s interviews where he conducts Zoom calls with the likes of Charlize Theron, Amy Schumer and Andra Day – sometimes with his son’s drum kit in the background.

The ultimate countryside retreat, the home sits on six acres and the property has many windows to let in the natural sunlight.

One of the five bedrooms is used for Willie’s interviews

The main bedroom features sloped walls and floor to ceiling glass doors that allow in the sunshine.

A master bathroom includes his- and hers-sinks, a walk-in shower and a large sunken bathtub.

The kitchen was fully renovated with four large skylights and a large center island perfect for family dinners.

Meanwhile. the garden reveals that the home is surrounded by large trees that provide security and a tranquil place to relax after work.

A cool blue pool is set into rocks, offering a natural feel to the look.

Willie is the co-anchor of MSNBC’s Morning Joe and anchor’s Sunday Today, where he is known for his long-form profiles of celebrities such as Hillary Clinton and Michael J Fox.

He also serves as a fill-in anchor on both the weekday edition and the Saturday edition of Today, and is a frequent guest on Andy Cohen’s late night Bravo show Watch What Happens Live.

The garden reveals that the home is surrounded by large trees