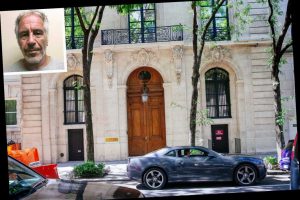 The Manhattan property sold to an undisclosed buyer Tuesday, Dan Weiner, an attorney for the estate told CNN.

Proceeds from the sale will be transferred to the Epstein Victims' Compensation Program to help support new claims. In February, the head of the EVCP said the program would be temporarily suspending new offers of compensation until they received more funding. According to the Times, the townhouse was first commissioned by Herbert Straus, whose parents co-owned the Macy's department store chain.

Epstein, who died by suicide in jail two years ago at the age of 66 while awaiting trial on federal conspiracy and sex trafficking charges, acquired the property in the 1990s. The Upper East Side mansion, which is one block from Central Park, features French limestone with carvings, 15-foot oak doors and several sculpture figures.

The residence was originally listed in 2020 for $88 million and was recently offered at $65 million.

Epstein also had several other expensive properties in his portfolio including a ranch in New Mexico, a waterfront mansion in Palm Beach, Florida, and a private island in the Caribbean.

The billionaire financier had pleaded not guilty to federal charges related to an indictment accusing him of running a sex-trafficking ring of underage girls, according to CNN.

If you or someone you know has been sexually assaulted, please contact the National Sexual Assault Hotline at 1-800-656-HOPE (4673) or go to rainn.org.