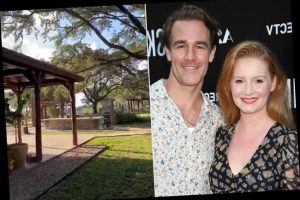 The mother of five and wife of Dawson's Creek star James Van Der Beek opened up about the long-distance move in an Instagram Live session on Tuesday, giving fans some insight into why she and James relocated from Los Angeles, and what it is about the new property that drew them in.

“The space available in Texas… where we’re at it’s expansive and there’s a lot of space and I feel that for a big family… it was just really, really necessary for us,” she continued, sharing that they decided on a town about 45 minutes outside of Austin where nature and space are both plentiful. In fact, Kimberly says that her favorite part of their new home is the acreage — the grassy compound measures about 36 acres in total. According to Kimberly, she and her family aren’t putting down roots in the Lone Star State just yet — they’re actually currently leasing their property, and plan to do so for about a year before making a permanent decision.

“We’re going to try Texas out for a year and really give a lot of love to this property,” she says in the Live, showing off the numerous cabins on wooded grounds, which they plan to utilize for various purposes, including a “lounge room” and guest houses for visiting friends and family. “We have incredible landlords, they’re magical, so they’re really letting us dip into it and really steward the land as if it’s our own and go wild with it. Which is really cool,” she said.

“It’s a very compound-like, village life that we’re building here,” Kimberly added, noting that her sister is currently pregnant and plans to move into one of the cabins on the property soon, as do some of their friends. “We are trying it on for size,” she says with a shrug in the Live. “It’s hard to tell what’s going to happen next. I’m loving every moment and really getting myself comfortable here.”

Another bonus of living in Texas: “I’ll tell you a secret: This costs less than it cost to live in Beverly Hills,” Kimberly says, panning the camera over the expansive grounds. “It’s kind of ridiculous. I love you, California, but I was so done with you.”

James first shared that the family was moving to the Lone Star state on September 30, sharing several photos of their empty Beverly Hills house to Instagram and writing "leaving Los Angeles.” "Sometimes a fuller life begins with an empty house," the actor wrote in the caption. "Leaving Los Angeles incredibly grateful for all the friends and memories we’ve made here. Onto the next big adventure! ❤️😊"

The family embarked on a 10-day road trip east, making stops in Arizona and New Mexico to see the sights along the way. On October 13, after arriving at their destination, James opened up on Instagram about what led to their decision to relocate the family. Alongside photos of the kids exploring their new home, he began the caption, "And… we’ve landed."

"In the last ten months, we’ve had two late-term pregnancy losses, each of which put @vanderkimberly in the hospital," the actor wrote, "we spent Christmas break thinking she had a tumor (the doctor was wrong, thank god), a business colleague I hired hijacked the project and stabbed me in the back, I was prematurely booted off a reality dancing show I was favored to win in front of the whole world, and my mom died." "And a shut-down," the Varsity Blues star continued, referencing the ongoing coronavirus pandemic. "All of that led to some drastic changes in our lives, and dreams, and priorities… and landed us here."

END_OF_DOCUMENT_TOKEN_TO_BE_REPLACED

END_OF_DOCUMENT_TOKEN_TO_BE_REPLACED
We and our partners use cookies on this site to improve our service, perform analytics, personalize advertising, measure advertising performance, and remember website preferences.Ok